De-Loused In The Comatorium (studio album) by The Mars Volta

De-Loused In The Comatorium by The Mars Volta
Year: 2003
Overall rank: 501st 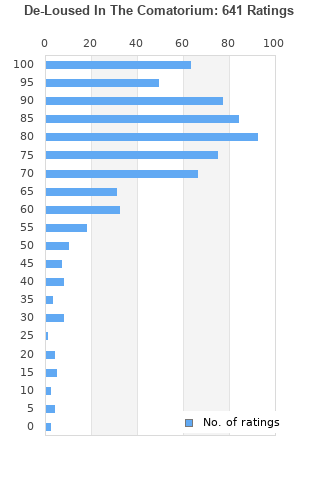 Deloused In The Comatorium by The Mars Volta (Record, 2003) Original pressing.
Condition: Used
$149.99

De-Loused In The Comatorium is ranked as the best album by The Mars Volta. 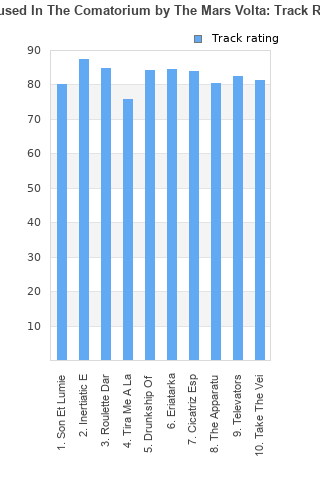 De-Loused In The Comatorium rankings

De-Loused In The Comatorium collection

De-Loused In The Comatorium ratings

Rating metrics: Outliers can be removed when calculating a mean average to dampen the effects of ratings outside the normal distribution. This figure is provided as the trimmed mean. A high standard deviation can be legitimate, but can sometimes indicate 'gaming' is occurring. Consider a simplified example* of an item receiving ratings of 100, 50, & 0. The mean average rating would be 50. However, ratings of 55, 50 & 45 could also result in the same average. The second average might be more trusted because there is more consensus around a particular rating (a lower deviation).
(*In practice, some albums can have several thousand ratings)
This album is rated in the top 3% of all albums on BestEverAlbums.com. This album has a Bayesian average rating of 78.5/100, a mean average of 76.7/100, and a trimmed mean (excluding outliers) of 78.6/100. The standard deviation for this album is 18.7.

De-Loused In The Comatorium favourites

De-Loused In The Comatorium comments

Amazing stuff. Nervous, fast paced, in your face prog, yet subtle and delicate at the same time. And hey, there's mellotron. Probably one of my favorite rock albums ever.
The kind of music that requires your full attention otherwise yeah, it can be unbearable.

Too dissonant and chaotic for my current state of mind. Very accomplished musicians are involved, but I could take less enthusiastic kinds of songs any time. Less is sometimes more.

A complex and mind bending concept album roughly translated to the visions of a real life protagonist’s dreams whilst in a drug endured coma. Entire internet chat columns are dedicated to decoding its twisted clever lyrics and themes - the ultimate rabbit hole if you’ve got time on your hands

Highlights: All of them.

Drunkship of Lanterns is killer. The rest of the album is really good, but sometimes I just want to listen to that song over and over

These guys are crazy awesome. The way Omar Rodríguez-López writes and thinks is very reminiscent of Robert Fripp/King Crimson, but the music comes at you full force like Bad Brains or Fugazi. De-Loused in the Comatorium might be their most accomplished and realized work, though I do go back and forth between this one and their next, Frances the Mute. Definitely give it a listen.

I remember listening to the last 10 seconds of "Inertiatic Esp" on MTV and thinking that something awesome had happened. I literally took note of the band's name and ran to buy the album. What an amazing trip to be 15 and discover a gem like that.

Your feedback for De-Loused In The Comatorium