Hail To The Thief (studio album) by Radiohead 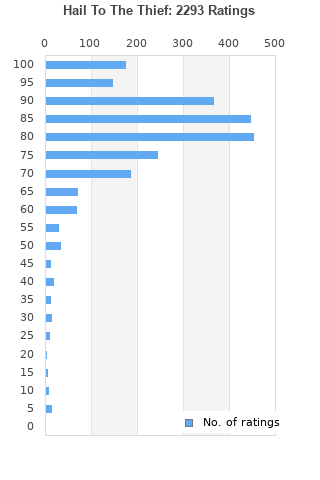 Hail To The Thief is ranked 7th best out of 22 albums by Radiohead on BestEverAlbums.com.

The best album by Radiohead is OK Computer which is ranked number 1 in the list of all-time albums with a total rank score of 90,899. 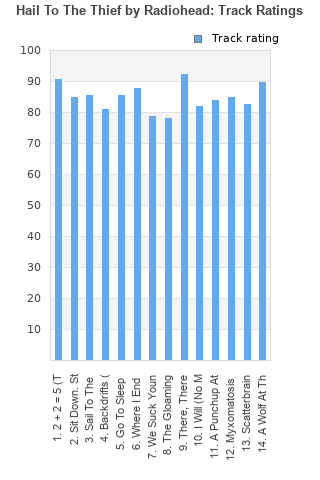 Hail To The Thief rankings

Hail To The Thief collection

Hail To The Thief ratings

Rating metrics: Outliers can be removed when calculating a mean average to dampen the effects of ratings outside the normal distribution. This figure is provided as the trimmed mean. A high standard deviation can be legitimate, but can sometimes indicate 'gaming' is occurring. Consider a simplified example* of an item receiving ratings of 100, 50, & 0. The mean average rating would be 50. However, ratings of 55, 50 & 45 could also result in the same average. The second average might be more trusted because there is more consensus around a particular rating (a lower deviation).
(*In practice, some albums can have several thousand ratings)
This album is rated in the top 1% of all albums on BestEverAlbums.com. This album has a Bayesian average rating of 81.5/100, a mean average of 80.1/100, and a trimmed mean (excluding outliers) of 81.6/100. The standard deviation for this album is 14.9.

Hail To The Thief favourites

Hail To The Thief comments

Scatterbrain, A Punch at the Wedding and There, There. That's it.

As someone who stopped listening to Radiohead after OK Computer, this album was a great surprise.

Excellent mix of traditional and modern instrumentation…and more importantly, a return of the dramatic shifts in dynamics that attracted me to the band in the first place.

A little bit bloated which is the only reason I have it so low in Radiohead's bestography. But it's still a great album. There There is one of their best and has really grown on me over the years. Other highlights are A Wolf At The Door, Go To Sleep and A Punchup At The Wedding. Weak tracks are I Will and The Gloaming.

A Wolf At The Door, There There, Sail To The Moon... beautiful tracks.

Hail to the Thief strikes a fairly considerable balance between their electronic side and their more alt rock side. This is my favorite Radiohead album so far. Songs like Where I End and You Begin, There There, Sit Down, Stand Up, I Will are some of their best, in my humble opinion.

Not my favorite by them, but I will always have a soft spot for this album, because it came when I needed it, don't think any other album has worked so perfectly timing-wise. Anyway, tracks 1,6,9,14 undoubtedly belong to their (and anyone's) best ever.

Your feedback for Hail To The Thief