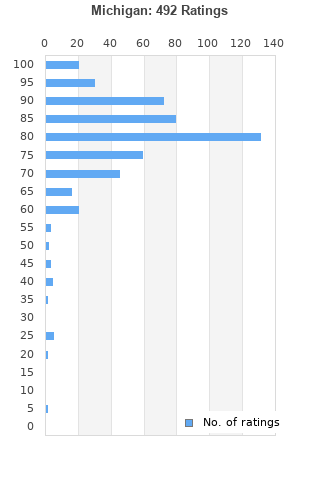 Michigan is ranked 4th best out of 24 albums by Sufjan Stevens on BestEverAlbums.com.

The best album by Sufjan Stevens is Illinois which is ranked number 45 in the list of all-time albums with a total rank score of 24,654. 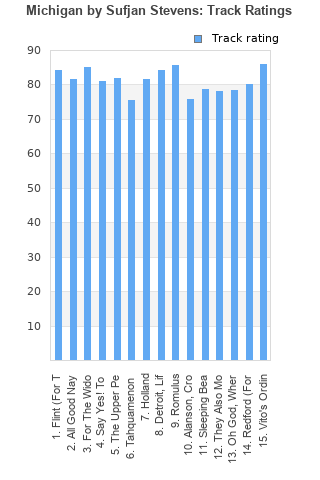 #
Track
Rating/Comments
1.
Flint (For The Unemployed And Underpaid)
Rating: 84 (109 votes)Comments:

For The Widows In Paradise, For The Fatherless In Ypsilanti
Rating: 85 (112 votes)Comments:

Rating metrics: Outliers can be removed when calculating a mean average to dampen the effects of ratings outside the normal distribution. This figure is provided as the trimmed mean. A high standard deviation can be legitimate, but can sometimes indicate 'gaming' is occurring. Consider a simplified example* of an item receiving ratings of 100, 50, & 0. The mean average rating would be 50. However, ratings of 55, 50 & 45 could also result in the same average. The second average might be more trusted because there is more consensus around a particular rating (a lower deviation).
(*In practice, some albums can have several thousand ratings)
This album is rated in the top 1% of all albums on BestEverAlbums.com. This album has a Bayesian average rating of 80.6/100, a mean average of 79.5/100, and a trimmed mean (excluding outliers) of 80.8/100. The standard deviation for this album is 13.0.

Another musical marvel by one of the most consistent artists in music. The fact that this is probably his 4th best album is astounding as it is just so amazing. It is delicate and beautiful right from the first track and some of the images he creates in your mind is breath taking. The lyrics are well thought out and fun to explore giving you lots to listen out for on revisits. Instrumentally, it is stunning and he weaves his way through the songs so well that it creates a smooth and enjoyable listen for us. He also packs the record full of such a diverse array of instruments that are all played perfectly and distributed in a way that they never feel crowded or convoluted which is such a difficult thing to achieve. The way he layers his music as well always puts me in awe of his work as there is so much to discover and every time I come back to records like these I find something new I didn't hear before. However, the record is a bloated release and unlike Illinois I do think some of the songs could be cut or at least reduced in length. Also, it is missing those truly phenomenal tracks that would send it into the next level and put it up with his better albums. Overall, this is another masterpiece by Sufjan and to not give it the praise it deserves due to his other releases is an injustice to the music.

I want more people to know about this! Almost as good as Illinois

If you like Illinois you will definitely like this one too, but it is a bit more tiring. Still a great album, 8/10.

THIS is considered second-tier Sufjan and that's just not fair.

An that has more delicacy and thought (personallY) than illinois. I really appreciate the sustained folk sound that really feels like rural Michigan.

Illinois and Michigan are both beautiful albums, but for different reasons. They both seem to explore similar thoughts and feelings, but in different ways. Where Illinois seems like a musical put on by schoolchildren that exceeds everyone's expectations and ends up being better than most Broadway musicals, Michigan is a play put on by adults that don't go out of their way to show everyone they're the best, but instead leave more room for breathing and interpretation. Where Illinois seems to say, "This is a sad song" and put all its listeners to tears, Michigan seems to say, "You can feel whatever you want when you listen to this, but I was feeling sad when I wrote it," and put its listeners in a somber mood that's not nearly as heavy as Illinois, but just a different kind of sad. I'm not saying either one of these options is better, in fact I like Illinois more because I've simply never experienced such strong emotions evoked by music before. However I can understand why someone would like Michigan more, because there's so much space to breathe and decide what to feel.

The first(actually one of two, at least so far)of Sufjan Stevens American state albums. Michigan, is not quite as great as it's successor, Illinois, would be, but it's still a brilliantly ambitious piece of work. Stevens really captures the atmosphere and mood of Michigan and there are some lovely sounds and songs. It's clear now that Stevens will never cover all U.S. states, and it doesn't even look like there will even be another one. I know artists have to move on, still I would love to see another one, California or Alaska, maybe? Go on Sufjan.

Your feedback for Michigan