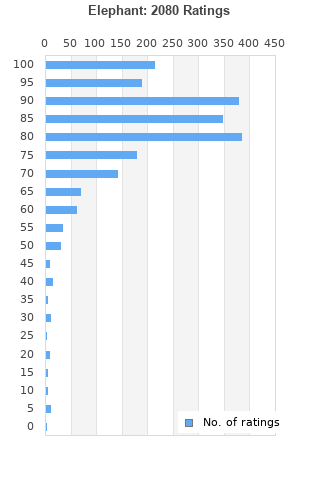 Elephant is ranked as the best album by The White Stripes. 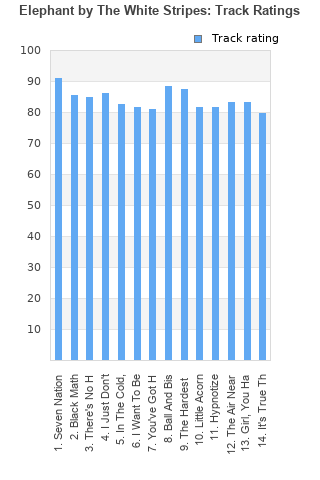 Rating metrics: Outliers can be removed when calculating a mean average to dampen the effects of ratings outside the normal distribution. This figure is provided as the trimmed mean. A high standard deviation can be legitimate, but can sometimes indicate 'gaming' is occurring. Consider a simplified example* of an item receiving ratings of 100, 50, & 0. The mean average rating would be 50. However, ratings of 55, 50 & 45 could also result in the same average. The second average might be more trusted because there is more consensus around a particular rating (a lower deviation).
(*In practice, some albums can have several thousand ratings)
This album is rated in the top 1% of all albums on BestEverAlbums.com. This album has a Bayesian average rating of 82.6/100, a mean average of 81.4/100, and a trimmed mean (excluding outliers) of 82.7/100. The standard deviation for this album is 14.9.

A blues guitar god. Pretty good song writer too. Only thing keeping this score down is a limited number of “crank it up” bangers, a la Hardest Button To Button.

Seven Nation Army is undeniably awesome. Ball & Biscuit and There’s No Home For You Here are pretty damn good too. But the majority of this album is the most basic rock diddies with little in the way of hooks or memorable bits.

The fact that this is considered “the best album of 2003” on this site when there were so many actually great albums released in 2003 weirds me out. I’m sure when it came out it was so inspiring and influential and all that, but judging the album as the album on its own, no outside context, what is all that special about this one in particular?

Personal preference for White Blood Cells, but this is very good.

"They don’t make them like that anymore". Well, I guess they do.

I couldn't get through some of this. Some good songs though and great guitar.

Your feedback for Elephant