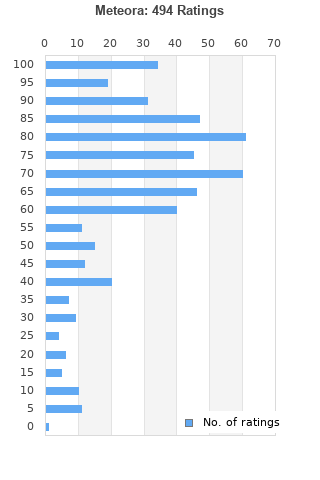 Meteora is ranked 2nd best out of 17 albums by Linkin Park on BestEverAlbums.com.

The best album by Linkin Park is Hybrid Theory which is ranked number 638 in the list of all-time albums with a total rank score of 2,922. 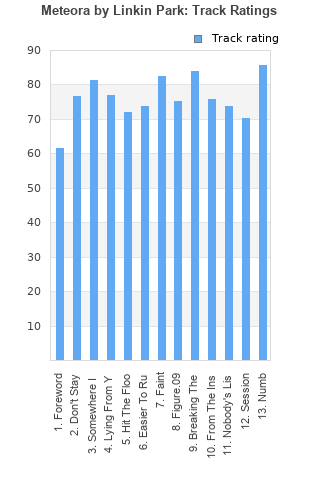 Rating metrics: Outliers can be removed when calculating a mean average to dampen the effects of ratings outside the normal distribution. This figure is provided as the trimmed mean. A high standard deviation can be legitimate, but can sometimes indicate 'gaming' is occurring. Consider a simplified example* of an item receiving ratings of 100, 50, & 0. The mean average rating would be 50. However, ratings of 55, 50 & 45 could also result in the same average. The second average might be more trusted because there is more consensus around a particular rating (a lower deviation).
(*In practice, some albums can have several thousand ratings)
This album has a Bayesian average rating of 67.7/100, a mean average of 67.6/100, and a trimmed mean (excluding outliers) of 67.6/100. The standard deviation for this album is 22.8.

It's not quite up to the level of Hybrid Theory, but it's a very good follow-up. Linkin Park proved they are not just a one-hit wonder with this album. My highlights are Faint, Lying From You and Breaking The Habit. There are no weak links on the album - consistently very good.

I'm one of those people who much prefers Meteora over Hybrid Theory. Hybrid Theory is a great album, but it has a few skippable tracks for me especially in the second half. Every track on this album however is at least good if not great. The album took all the best elements from Hybrid Theory and packaged it into a great less-than-40-minute album. "Don't Stay" is an awesome opener. "Somewhere I Belong" has a great chorus. "Lying From You" is one of their heaviest songs and I love Chester's screams. "Hit the Floor" has some heavy guitar work on it. "Easier to Run" is a pretty decent song, but nowhere near my favourite. "Faint" is more akin to standard hard rock/rap rock than nu metal, but I love the song. "Figure.09" is my least favourite song on the album, but it's still a solid track.

"Breaking the Habit" is a goddamn masterpiece. My favourite Linkin Park song and one of my all-time favourite songs. The lyrics paint a beautiful picture on the struggles of depression and addiction, and Chester gives his best vocal performance on this song. "From the Inside" is a good track though I'm surprised they chose this as a single. "Nobody's Listening" is a fun hip-hip flavoured song, which is a reprieve from all the angst. "Session" is another great showcase for Mr. Hahn and a good sequel to "A Cure for the Itch" from their debut. And while I wouldn't have ended the album with this song, "Numb" is a classic song for a reason.

People often call this the brother album to Hybrid Theory, but I feel it's a bigger progression than that. For me it has more soul than Hybrid Theory.. and the words come from Chester's heart across much of the record.

Breaking The Habit is a masterpiece.

Yep, I also think it is better than Hybrid theory. Still pretty meh, but both Breaking the habit and Numb are fantastic tracks.

Much better than Hybrid Theory.

This really gets a lot of flack. Just because it plays on the radio doesn't mean its bad. It's great!

It´s a lot better than Hybrid Theory, where they played their songs on repeat over and over, but this one still has immensily horrid filler and a fair amount of edge. Breaking The Habit is the best song this band has ever made.

Great nu-metal album that should be ranked much higher in 2003. I will say it is missing that one song that I can play over and over for decades, but there is a lot of quality material I can listen to whether driving, working out or just chilling on my deck

Meteora is just as good as Hybrid Theory but it is so similar to the debut that it is a bit of a letdown.

It is tight and efficient in it's execution which doesn't leave a lot of room for the songs to breathe or meander.

The singles are all highlights, Breaking the Habit is one of the best Linkin Park songs. Numb is excellent too.

Hybrid Theory 2.0 is great if you already like Hybrid Theory. Fans started wondering if they had any versatitity after this. Turns out Linkin Park versatility is to slow down and chill down the rock. Their popularity started to chill down as well after this.


Surprisingly though, they have carved out themselves a pretty lengthy career.

Your feedback for Meteora