Chutes Too Narrow (studio album) by The Shins 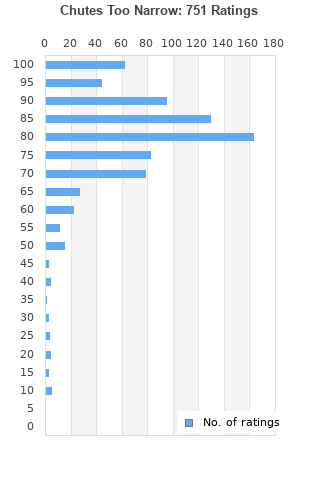 Chutes Too Narrow is ranked as the best album by The Shins. 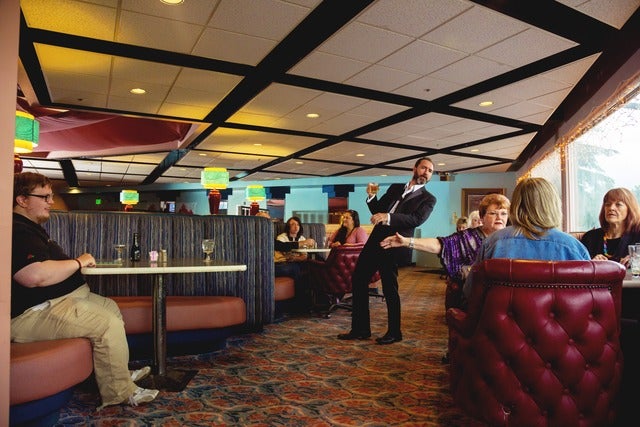 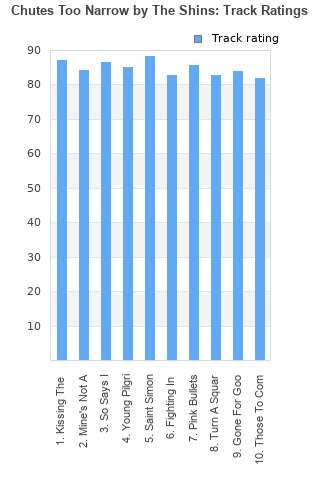 Rating metrics: Outliers can be removed when calculating a mean average to dampen the effects of ratings outside the normal distribution. This figure is provided as the trimmed mean. A high standard deviation can be legitimate, but can sometimes indicate 'gaming' is occurring. Consider a simplified example* of an item receiving ratings of 100, 50, & 0. The mean average rating would be 50. However, ratings of 55, 50 & 45 could also result in the same average. The second average might be more trusted because there is more consensus around a particular rating (a lower deviation).
(*In practice, some albums can have several thousand ratings)
This album is rated in the top 2% of all albums on BestEverAlbums.com. This album has a Bayesian average rating of 80.5/100, a mean average of 79.3/100, and a trimmed mean (excluding outliers) of 80.6/100. The standard deviation for this album is 14.7.

This album is so consistently amazing all the way through. Every single track is great and I would recommend every single song to anyone who hasn't heard it before. The song writing is the real strength of the record with the lyrics having so much depth and allowing so much room to be able to explore them. Alongside this is the tight guitar work and the drums on this album are just superb. Furthermore, the record never slows down and so you barely notice the 33 minutes go by and at the end I just want to start it over again. Overall, the album is delicate and beautiful but also loud and energetic when it needs to be making it never dull or disinteresting and that make it a record of the highest quality in my opinion.

I've heard all but one of these songs at least 10 times before, but I've never listened to them in the context of this album. It adds a little more with the scope of fate, love, hate, religion, science, nihilism, and the detraction from each of them. I think Mercer's lyrics, though not quite as complex as Oh, Inverted World's, tie quite nicely with each other, giving the listener a little more of an understanding at what he's getting at. Musically, I think this album is more realized than its predecessor, with more polish on the guitars, more drive on the drums and the bass guitar, and more emphasis on the dynamic shifts.

I think that this album is one of the top 3 of 2003 with Room on Fire and Transatlanticism and may very well vie for #1. It has so much to say and is thought-provoking and accessible to listen to at the same time- a trait not many albums share.

Kissing The Lipless, So Says I, Young Pilgrims, Saint Simon, Fighting in a Sack, Gone for Good

I've given this album a rating of 85. That is because I think it is excellent but not exceptional. I reserve my 90's and 100 ratings for only those albums that are really top drawer and these are few and far between. I am not a Shins fan as such but I certainly recognise the brilliant songwriting capabilities of Mercer, the excellent playing of the band and the talent of the production and recording teams. Some of the songs are beautiful, some are cleverly constructed, most have superb lyrics and many include little bits of added instrumentation that help to add, character, depth and ultimately enjoyment. The standouts for me are 'Kissing the Lipless, So Says I, Saint Simon and Pink Bullets. I would highly recommend this to anyone who has not listened to the Shins before.

Woah, this was a beautiful ride, a better ending to it would have made it perfect.

A folk album with lyrics as it's principal trait. I feel like this album needed something more, I don't know, the way It is, It sounds like It could have been better, maybe trying different things? The songs kind of sound the same, and they all have a pretty similar vibe to It.
I guess The Shins will never go on to write something as good as "New Slang".

This album breaks my heart in the most beautiful way. One of the best written albums I've ever heard.

I'm pretty biased toward this album, but I love it. It just has such a nice polished sound, and the songwriting is superb. The only track I wouldn't give five stars is Those to Come.

This album is the peak of James Mercer and The Shins creativity thus far. It is absolute indy rock perfection. If anyone asks you how to define indy rock just throw this album at them. Each track is so damn good it's difficult to pick a standout track - not a weak track on the whole album. Catchy hooks come at you relentlessly. The lyrics are fantastically enigmatic, poetic, and quirky. Mercer's vocals are at their most expressive and emotive. The guitar has a raw edge yet the album production is far more polished than Oh, Inverted World. All in all I cannot fault Chutes Too Narrow. If I were to be picky it only suffers in comparison to other great albums in this chart due to the fact that it has few songs that can lay claim to being hailed as all time classics. However, any number of these songs have the quality to be seen as classics. Perhaps they get lost in amongst the company they keep...

ALBUM HIGHLIGHT: Probably Pink Bullets, but depending on the day it could be Mine's Not A High Horse, or Kissing the Lipless, or Those to Come. or...

Your feedback for Chutes Too Narrow