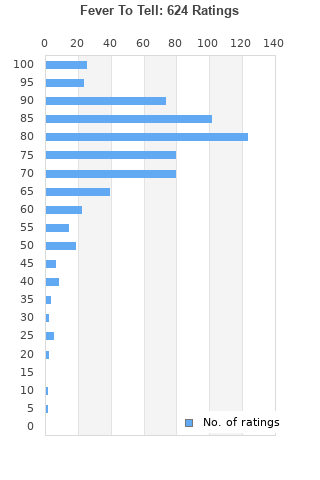 Fever To Tell is ranked as the best album by Yeah Yeah Yeahs. 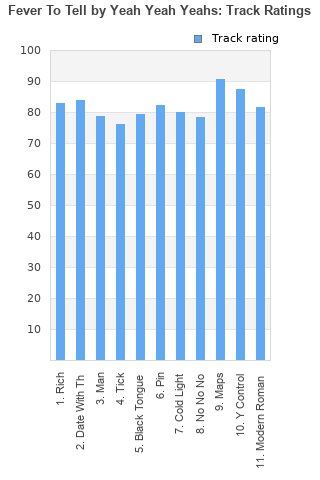 Rating metrics: Outliers can be removed when calculating a mean average to dampen the effects of ratings outside the normal distribution. This figure is provided as the trimmed mean. A high standard deviation can be legitimate, but can sometimes indicate 'gaming' is occurring. Consider a simplified example* of an item receiving ratings of 100, 50, & 0. The mean average rating would be 50. However, ratings of 55, 50 & 45 could also result in the same average. The second average might be more trusted because there is more consensus around a particular rating (a lower deviation).
(*In practice, some albums can have several thousand ratings)
This album is rated in the top 4% of all albums on BestEverAlbums.com. This album has a Bayesian average rating of 77.2/100, a mean average of 76.4/100, and a trimmed mean (excluding outliers) of 77.3/100. The standard deviation for this album is 14.4.

Aggressive and relentless debut. Is she a good singer?, mediocre at best, but suits these songs nicely?

Karen O is definitely the best thing about this, but also sometimes the worst.

Favoritas: Maps Rich, Pin, No No No, Y Control, Date With The Night

Fever to tell, is one of the most exciting rock'n'roll debuts ever. Karen O fronts an exciting trio full of grit and attitude. All this wouldn't matter if the songs were no good but fortunately every one is a killer. Date with the night, man, and, tick, are just three of the best cuts here. A great debut, up there with, marquee moon, appetite for destruction, and, never mind the bollocks. Great stuff.

I like to see this as sort of a concept album.

Whether that was the band's intention or not is irrelevant.

I view the first 8 tracks as a look at this super high energy punk that says what she wants, does what she wants, and hates the establishment. In fact if those first 8 were the only ones on the album I don't think I would ever this to any of it again.

The same character that mockingly says "I'M RICH BITCH" and "BOY YOU'RE JUST A STUPID BITCH, AND GIRL YOU'RE JUST A NO GOOD DICK!!!" has this really soft side where she says she isn't like everyone else, she won't change and her lover should know that.

An intriguing thing is Maps is the only song on this album that really embraces this vulnerability (besides the hidden track, but I think the fact that the track was hidden would imply it's a less vulnerable song) because the last 2 track are probably the most nihilistic in terms of love.

Y control starts off saying she's just a "poor little baby" for believing that she could be open about her love, and addressing her lover that she wishes she could buy the part of her she left with him.

Modern Romance is a song about having no hope for love, which is somewhere we've all been. The first lyric "Don't hold on" is so impactful and describes the entire song perfectly.

Then there is the hidden track "Poor song" which is about how she's bringing back the irony by saying things like "I'm ain't scared of loving you" when a pre schooler can tell that that isn't true. It was a perfect hidden track, because it actually had a reason to be hidden

Now let's look at the first 8 tracks more critically. I like them but I'm very frustrated that these were the songs they chose to use for their opening statement because their first EP had much better songs (Bang, Mystery Girl, Art Star) on it that could have easily replaced the weaker songs on this album (Rich, tick, No No No). Karen was sort of a cop out with her lyrics too because she always said she's not a good lyricist, but that's just a lie because on that EP and the last couple tracks on this album had amazing lyrics.

This album is still fantastic, I just know it could've been a perfect album if it wanted to be.

Everything HazeyTwilight said is so right. The first 8 songs sound like they would fit perfectly in the soundtrack for Scott Pilgrim vs. The World, and then the last three songs are a really chill conclusion.

Not so good, but has good songs. Decent album, maybe I need to listen to it more. I honestly prefer It's Blitz, even though a sightly little more.

Hmm...hard to criticize...at times at the start of the record it can sound a little juvenile, but i can sort of get past that because the song's still sound pretty good, but then the album takes a emotive turns when Maps comes on in the tracklisting and i feel like that's actually where the Yeah Yeah Yeah's hit the hardest. Don't Know what to think 7.5 or an 8 somewhere in between there i guess..pretty good debut album.

with the consensus here - as an album, pretty good, but I care more about the standout tracks, and of course Maps.

Your feedback for Fever To Tell