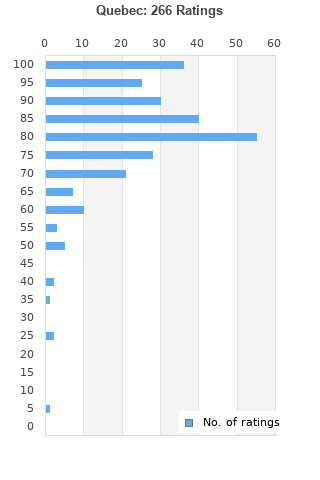 Quebec is ranked 2nd best out of 22 albums by Ween on BestEverAlbums.com.

The best album by Ween is The Mollusk which is ranked number 459 in the list of all-time albums with a total rank score of 4,039. 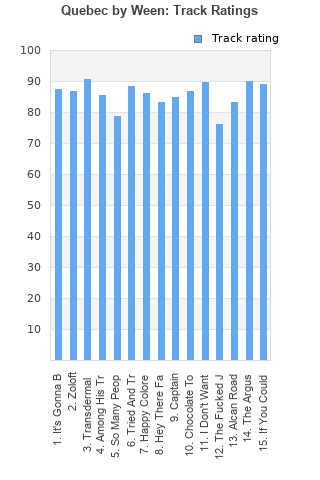 If You Could Save Yourself (You'd Save Us All)
Rating: 90 (94 votes)Comments:

Rating metrics: Outliers can be removed when calculating a mean average to dampen the effects of ratings outside the normal distribution. This figure is provided as the trimmed mean. A high standard deviation can be legitimate, but can sometimes indicate 'gaming' is occurring. Consider a simplified example* of an item receiving ratings of 100, 50, & 0. The mean average rating would be 50. However, ratings of 55, 50 & 45 could also result in the same average. The second average might be more trusted because there is more consensus around a particular rating (a lower deviation).
(*In practice, some albums can have several thousand ratings)
This album is rated in the top 1% of all albums on BestEverAlbums.com. This album has a Bayesian average rating of 82.3/100, a mean average of 81.9/100, and a trimmed mean (excluding outliers) of 82.7/100. The standard deviation for this album is 14.2.

wow... im just glad i took the time to listen to this album of the day... more than just worth it. Every track has a different vibe from the other. I could do without So Many People In the Neighborhood but if I look at it like a silly, long interlude I can easily forgive it. These guys are good

Took me too long to get to this album. Quebec is an absolute magnum opus. I thought The Mollusk was great, but this is honestly way better. Pretty much every song is a highlight. Track 12 is… interesting. Don’t let it sully your listening experience though, this is an absolutely fantastic record.

With its highs and lows from The Argus to the Fucked Jam, even if you don't like this album you have to admit there is no other album quite like it. Personally it's one of my favourite albums of all time.

Boognish Lives! I love the boys from New Hope. Quebec has been a favorite of mine since its release. Don’t let the opening Lemmy sounding track fool you. Even though it’s great, the rest of the album sounds nothing like it. Quebec has a lot of Ween’s most beautiful and transcendent music, with a couple of silly exceptions. Most of the songs are slower tempo and suck me into a dreamlike world. Transdermal Celebration, Among His Tribe, Tried And True, Captain, Chocolate Town, I Don’t Want It, The Argus, and If You Could Save Yourself are all 95-100 rated tracks for me. They are still fresh after 15+ years of regular play.

Oh my god this is good. Honestly pretty baffling to me that this album isn't better known.

Yes, it is so incredibly good that many of the tracks are still ranking at or around 90.

If you've never heard this album, it's because it's by Ween. Just about everybody, at a certain point before this album, wrote Ween off as a novelty band (and rightfully so, at least for the early 90s). However, these guys are excellent songwriters, and after a certain point they really blossomed. This is their magnum opus, the album where they, having already distanced themselves from novelty status, completely cut off any echoes of it. This is Ween matured, and at their full potential, and it's really really good stuff -- not by just the standards of the band (which are fairly high anyway), but in general.

Atmosphere is a key element to this album, and is used beautifully in Captain, Zoloft, Alcan Road, and Among His Tribe. There's also fantastic guitar work on tracks like Transdermal Celebration and Tried and True. The penultimate song, The Argus, is hands-down the greatest thing Ween has ever done and one of my all-time favorite songs. There's something here for every emotion, and it's a quintessential prog-rock album no matter who you are.

Don't raise an eyebrow because you've never heard of an album before. If it's high-rated, give it a shot. There's probably a reason.

This is ma favorite Ween album and one of my favorite records evers as well, just get me to diferent atmospheres, is the brown town at their best...

The argus absolutely deserves at least a 90

I like this album, it is by no means perfect and it has some annoying compositions but I can not fault the ambition. I have not heard too many bands with such talent in the 20 years I have been alive. 'I dont want it' is stunning and every song is a complete surprise.

Your feedback for Quebec