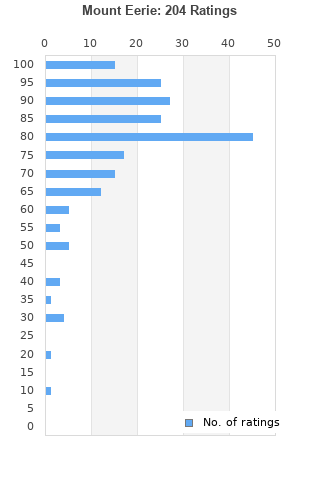 The Microphones 'Song Islands' LP NEW Mount Eerie
Condition: New
Time left: 3d 4h 29m 40s
Ships to: Worldwide
$27.00
Go to store
Product prices and availability are accurate as of the date indicated and are subject to change. Any price and availability information displayed on the linked website at the time of purchase will apply to the purchase of this product.  See full search results on eBay

Mount Eerie is ranked 2nd best out of 15 albums by The Microphones on BestEverAlbums.com.

The best album by The Microphones is The Glow Pt. 2 which is ranked number 183 in the list of all-time albums with a total rank score of 9,990. 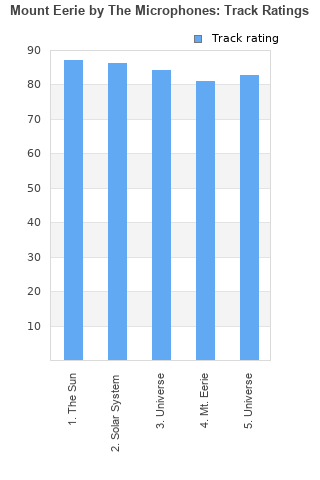 Rating metrics: Outliers can be removed when calculating a mean average to dampen the effects of ratings outside the normal distribution. This figure is provided as the trimmed mean. A high standard deviation can be legitimate, but can sometimes indicate 'gaming' is occurring. Consider a simplified example* of an item receiving ratings of 100, 50, & 0. The mean average rating would be 50. However, ratings of 55, 50 & 45 could also result in the same average. The second average might be more trusted because there is more consensus around a particular rating (a lower deviation).
(*In practice, some albums can have several thousand ratings)
This album is rated in the top 1% of all albums on BestEverAlbums.com. This album has a Bayesian average rating of 81.2/100, a mean average of 80.1/100, and a trimmed mean (excluding outliers) of 81.6/100. The standard deviation for this album is 15.3.

I feel that the first two songs are great, but it kinda trails off in the second half. Also wtf is up with part IV at the 1:54 mark. It becomes an annoying pop-ish song.

I used to compare Phil Elvrum's works as the musical equivalent of Lars Von Trier's movies. The Boldness is combined with a sense of creativity that spills emotion all over the listener, He/She is ripped out from the comfort zone and thrown out in the middle of a hurricane without any clues of how he got there, and how Elvrum decides to treat us is insanely weird, he quietly comes closer and closer until we can listen to him breathing, so close that we can hear his blood moving through his veins, so close that we can see that wilderness that is covered behind his eyes. He appears alone to calm down the disorder that is established in "The Sun", and inserts us in some kind of stellar ritual, with the moon and the sun as witnesses, the abstract glow is now swallow by a big mass of vacuum and negative energy coming from a big black hole. What I most love in Phil's works is how much it seems personal and how much it represents the chaos that is the human mind, our pessimism personified in trumpets and nymphs' voices, inducting you to be weaker and weaker. "Solar System" is the perfect ode to the myth of the eternal return, The troubadour that interacts with his loneliness and outside forces to wish his lover comeback, The continuous use of "I Know you're out there" reinforces the feeling of how much he has waited and will wait for her to be back, let it rain, let there be sun, the world will end and his dreams will still be floating in the ether. In "universe I" the band join its multi-instrumental magic to give life to the fragility of human conscience and confidence, from the lonely guitar that follows Elvrum through the glow of the moon, going through reflexes in mud puddles with her curves drawn, until our hero down to his knees offers himself to the force that moves the universe, and we are brought then to a weird journey that is mount eerie, a force that purifies and devours each piece of your soul. The eclipse starts, his eyes are burnt, he is tilting towards the sun, and the mount eerie wakes from his thrones and begins to drain any light that remains in the listener's hope. This has been a hell of an adventure huh? When I first completed Mount Eerie I got myself theorizing all night and dawn, what the hell did I just passed through? Is this some kind of metaphor to the trifling human emotions and feelings? That's why I consider this record to be so great, it explores the outside world of music, it's not just about listening to something, but rather taking a philosophical walk to somewhere, we are humans and overall we should know how soulless we have become in the last years. We have stars and galaxies inside us, we are a whole universe of deception and loneliness, love and hate, we are a big avalanche of synesthesia, we are a big mess of sense. And In the end we will be all swallow and superb about how deep our night is, how coloured our supernovas are, how enormous our soul is.

Very fun album. I liked all of the sounds on this one. Album feels like it was buried away from the world and only discovered 100 years in the future.

Your feedback for Mount Eerie