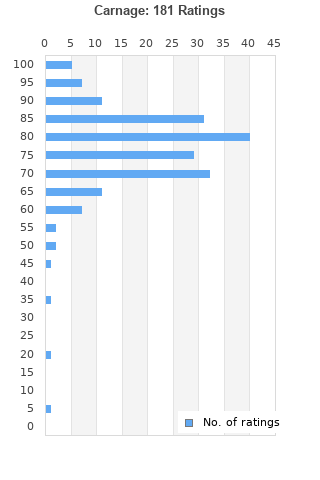 Carnage is ranked as the best album by Nick Cave & Warren Ellis. 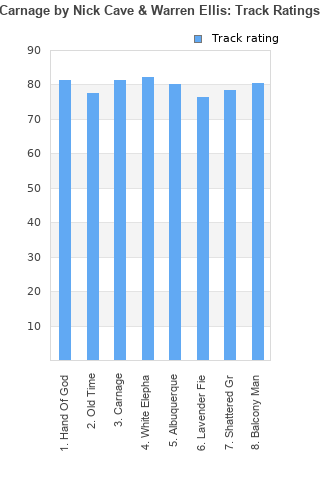 Rating metrics: Outliers can be removed when calculating a mean average to dampen the effects of ratings outside the normal distribution. This figure is provided as the trimmed mean. A high standard deviation can be legitimate, but can sometimes indicate 'gaming' is occurring. Consider a simplified example* of an item receiving ratings of 100, 50, & 0. The mean average rating would be 50. However, ratings of 55, 50 & 45 could also result in the same average. The second average might be more trusted because there is more consensus around a particular rating (a lower deviation).
(*In practice, some albums can have several thousand ratings)
This album is rated in the top 4% of all albums on BestEverAlbums.com. This album has a Bayesian average rating of 77.1/100, a mean average of 76.3/100, and a trimmed mean (excluding outliers) of 77.3/100. The standard deviation for this album is 12.6.

Warren Ellis is a subtle genius. Cave is an intimidating genius. Together they make swirling mixtures of contrasting hues of musical mischief to lose your mind within.

Very emotional album that sometimes eschews musicality for feeling and impact. Not overly familiar with Nick Cave and his work but I found some moments on this record to be powerful.

I can't say I'm a huge Nick Cave fan - there are two albums of him that I have a relatively clear and vivid perception, which are Murder Ballads and Abattoir Blues/The Lyre Of Orpheus, the rest of his discography is one big blur. Still, I was eager to give this a try, as I had almost convinced myself that his work outside the Bad Seeds would appeal to me much more. You know what, the first track actually did, you find yourself in a dark and fierce environment that instantly captivates you. The emergence of the first warning sings marked the second track. It followed the same direction and continued the build up of a grim atmosphere, but didn't grip me as tight. Then, instead of expanding, the album started drifting, by no means was it bad, it simply tried something different and as a result lacked the intensity I expected. It went from "take no prisoners" to "a minimalist's approach to grandeur", if that makes any sense - probably not. Also, a couple of tracks gave me some real The National vibes, a pleasant surprise for sure. Despite the above, I would rank this near the very top of his catalogue, which shows how lukewarm my feelings towards his work are. Sad but true.

Following the devastatingly emotional soundscapes of 2016's ‘Skeleton Tree’ and 2019's ‘Ghosteen’ which both turned into a long act of martyrdom to slog through, Cavie teams up with bud Ellis to return to the brooding menacing style more familiar with The Bad Seeds catalogue and I for one love love it

A rock solid return to form

The Bad Seeds who ?

(Amazing, deep, dark production dominates this album and steals the show. Cave’s voice and lyrics continue to fail to win me over.)

Of all the all time great singer/songwriters and all those legendary musicals icons from the west that I have tried to get into, perhaps none has alluded that moment of “EUREKA!” as much as Nick Cave. He has sooooo many famous and well respected albums yet never have I really felt more than an appreciation for his music. The album that came closest to making me a fan was The Boatman’s Call. Quite a well made album, for sure. But it still never closed the gap between arms-length-admiration to true emotional and personal liking or investment.

And then this year Carnage came out. I saw all the love and praise for Cave and to a lesser degree Ellis, and I felt both excitement to check it out and a certain back off or delay as well. Cuz I had a feeling I would not love the album and maybe even dislike it.

But I can say that after a couple listens I DO NOT dislike it. I like it. It’s beautiful. The production is so BIG and so embracing, the arrangements are so deeply felt and sad.

The same things which kept me an arms length away from adoring all other Cave albums, however, still exist here. And for some other people these things may very well be the reason they love Cave’s work. It comes down to the vocals and the lyrics. The vocals are unique and iconic but never have I loved or even particularly liked them. That somewhat gothic croon, the drama and the near-theatricality of his delivery, the way every word is clearly voiced. Not a fan. It’s not bad, but for me to really get into an artist who puts so much emphasis on his voice, I need to, well, love the voice.

As for the lyrics, sometimes they are deep and moving. But most of the time they seemed quite shallow. Probably it’s just me who is shallow and not picking up on the nuances. But either way, I have not, as of now, latched on to the lyrical content here.

Overall, the production and the grandeur of the atmosphere steals the show. I love that aspect. And I would say this is a good album. Just not AOTY contention for me personally.

Didn't really stir me at all. I'm sure it's lyrically sound and the music is pleasant enough, it's just not my bag.

I feel like Nick Cave got even better with age but really anything he does is good to great.

Not as great as Cave's previous two albums, but still very good. The title track in particular is excellent.

Your feedback for Carnage