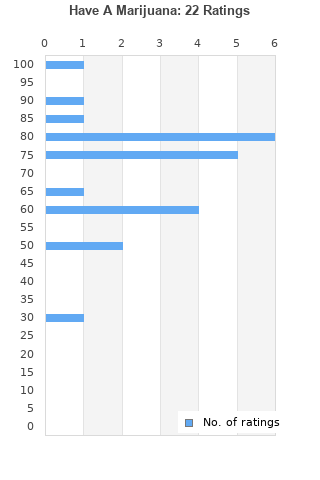 DAVID PEEL & THE LOWER EAST SIDE ~ HAVE A MARIJUANA~ ON ELEKTRA RECORDS LABEL
Condition: Used
$40.00

Have A Marijuana is ranked as the best album by David Peel & The Lower East Side. 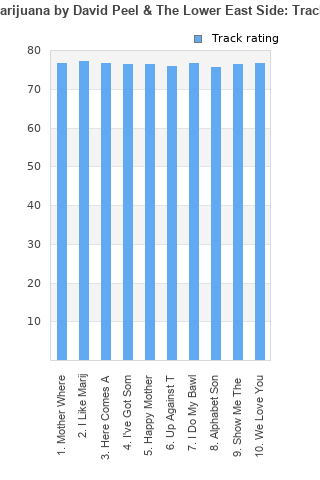 Have A Marijuana rankings

Have A Marijuana collection

Have A Marijuana ratings

Rating metrics: Outliers can be removed when calculating a mean average to dampen the effects of ratings outside the normal distribution. This figure is provided as the trimmed mean. A high standard deviation can be legitimate, but can sometimes indicate 'gaming' is occurring. Consider a simplified example* of an item receiving ratings of 100, 50, & 0. The mean average rating would be 50. However, ratings of 55, 50 & 45 could also result in the same average. The second average might be more trusted because there is more consensus around a particular rating (a lower deviation).
(*In practice, some albums can have several thousand ratings)
This album has a Bayesian average rating of 71.7/100, a mean average of 71.1/100, and a trimmed mean (excluding outliers) of 71.1/100. The standard deviation for this album is 15.1.

Have A Marijuana favourites

Have A Marijuana comments

I had "a marijuana" with Peel on the street in the Village in 1980.

Joyous, raucous and highly influential. it has a bit of a time capsule feel to it. A true classic and just another reminder of how cool the late 60's period was in the art it was creating. A not always pleasant time to be alive due to war and civil unrest but the art was magnificent moving and timeless

David Peel's contribution to the counter-culture of the 1960s is a significant but largely under-recognized one. The punk aesthetics of the late 1970s can probably be traced back to the ramshackle street busking-style approach of Peel and his fellow travelling minstrels who utilise folk agit-prop and Fugs-style satire to comment on the social issues of the day. There is a wonderful organic sense of authenticity, albeit simplicity, in Peel's art. His lyrics are deceptively clever, the spartan hillbilly hoedown nature of the music, story-telling and comedy skits fresh, and his the use of the streets of New York's Lower East Side, an innovation (copied by John Lennon for 'Give Peace A Chance'). As a form of politically-based activism, it could be argued, that the contemporary occupy movement be traced back to Peel's street "happenings".

Your feedback for Have A Marijuana