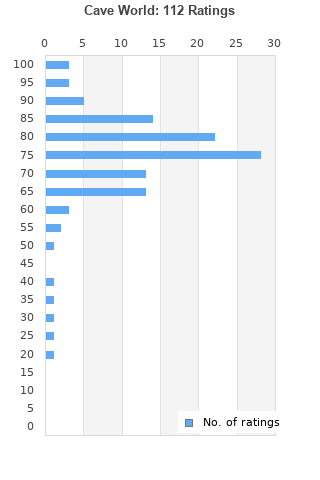 Cave World is ranked 2nd best out of 4 albums by Viagra Boys on BestEverAlbums.com.

The best album by Viagra Boys is Welfare Jazz which is ranked number 4467 in the list of all-time albums with a total rank score of 311. 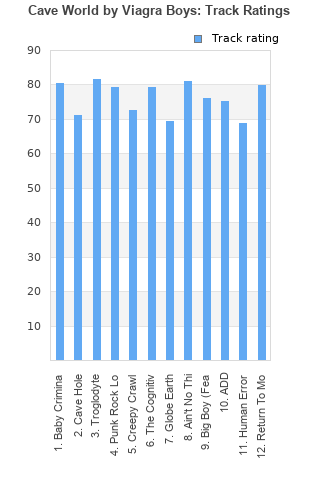 Rating metrics: Outliers can be removed when calculating a mean average to dampen the effects of ratings outside the normal distribution. This figure is provided as the trimmed mean. A high standard deviation can be legitimate, but can sometimes indicate 'gaming' is occurring. Consider a simplified example* of an item receiving ratings of 100, 50, & 0. The mean average rating would be 50. However, ratings of 55, 50 & 45 could also result in the same average. The second average might be more trusted because there is more consensus around a particular rating (a lower deviation).
(*In practice, some albums can have several thousand ratings)
This album is rated in the top 9% of all albums on BestEverAlbums.com. This album has a Bayesian average rating of 75.6/100, a mean average of 74.4/100, and a trimmed mean (excluding outliers) of 75.9/100. The standard deviation for this album is 12.9.

“Cave World” sees the Viagra boys point their absurdism towards conspiracy theories. Seb inhabits malformed characters focused on devolutional belonging in a world they don’t understand. In “Return to Monke”, he challenges them to quit their jobs and move to the jungle on a hyper-guitar drive. The fantastic “Troglodyte” sounds like a more muscular devo song with sturdy bass and zooming pan flute synths. It reaches the conclusion that they really would not succeed even in the simpler stone age. There is a greater underlining of electronics to their sound here. The noisy dance punk is laced with synths that sound both futuristic and prehistoric. This reinforces the lyrical focus on ape status. The album does retreat from the concept into their traditional scum fair. “Punk rock loser” and “Big boy” are great songs even if at the cost of atmosphere. Worthy of a hardy “OOK”.

This was my first time listening to Viagra Boys and I was impressed by the intriguing concept, brash performances, and sharp whit on display.

Cave World charts a pretty straightforward course from one edgy dance-punk social critique to another, never uncovering any new truths about the cacophony of late-stage capitalism's idiocies and idiosyncrasies, but nonetheless processing and normalising common leftist anxieties in a way that is at least somewhat calming to the ear. Hearing someone singing sardonically about how anti-vaxxers believe "they're putting microchips in the vaccines" momentarily supplants one's conviction that we truly are in the end days. In other words, the mainstreamed conspiratorial belief in the widespread injection of 5G into the populations veins for purposes of bio-terrorist mass surveillance is rendered no different to all the normal mundane gripes people sing about and dance to. Reductive... but how else are you going to make it fun?

This is the dumbest smart album I've ever heard. Dumb in that the vocals are brash and are not subtle at all. The lyrics are not exactly complex and poetic either. However this album tackles societal ills with such precision. It's also very funny.

The biggest themes of this album are violence, technology, male insecurity, and anti-intellectualism and how intertwined these things are. Basically the thesis of this album is that 4chan is ruining the world. The track "Troglodyte" presents this thesis by wrapping all four of the themes listed earlier. The song describes a man who peruses conspiracy theories, whether they be the Great Replacement or Anti-Vax. This character has built up a hatred for "those who wronged him", which is probably feminists and minorities. He seeks to take out this hatred by inflicting violence upon a group of people with his gun. This is a very, very common occurrence as seen in almost all mass shootings. The Buffalo and Uvalde shooters were both 4chan memelords with manifestos on how feminism and brown people are ruining western society.

Another brilliant take on modern society is on "Return To Monke", which, on its face, is such a funny song title to begin with. The point of this song is that all of the ills described previously on this album are basically inherent to humans. We are violent creatures who operate mostly on 'vibes' rather than actual logic and thought. We are paranoid and insecure and dumb at a fundamental level. This song is saying that the advent of society should serve to further us away from these characteristics, "leave society, be a monkey". However, society has not done a good job of removing these traits. People are still violent and paranoid. The track concludes with a monologue about a beheading at the office. What is supposed to be a traumatic event is described as "a good day" because everyone did such a job cleaning up the mess. This monologue is so good at demonstrating the desensitization to violence that we have at this point in history.

This is their most solid and consistent outing yet. Its fun, its noisy, it's obnoxious, and most importantly it's the Viagra Boys

Viagra Boys are not your normal, average dudes. They're savage, and really cool.

Is it ironic that the main problem of this politically-driven record with tracks that literally refer to troglodytes and directly reference charismatic religious evangelists is the lack of meaningful evolution of the Viagra Boys sound? Perhaps Cave World, an attempt to balance an overt political message while still maintaining the dirty vibe of Viagra Boys that we know and love, is a minor hiccup...VB is best when they are, to quote Sebastian Murphy, "bad and loose", and that's just not consistently happening on this record.

Your feedback for Cave World