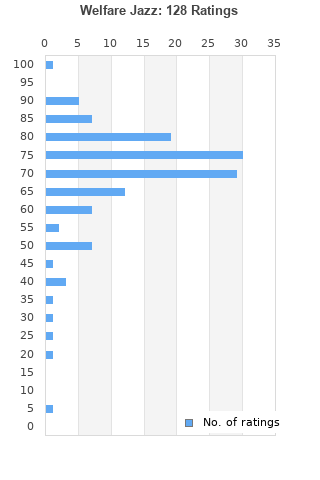 Welfare Jazz is ranked as the best album by Viagra Boys. 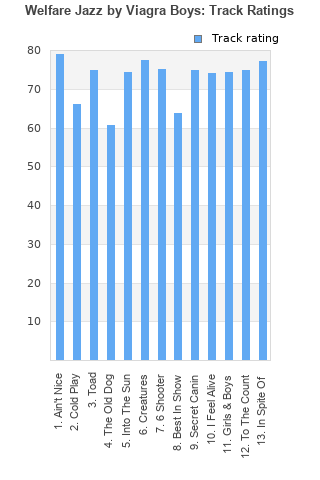 Rating metrics: Outliers can be removed when calculating a mean average to dampen the effects of ratings outside the normal distribution. This figure is provided as the trimmed mean. A high standard deviation can be legitimate, but can sometimes indicate 'gaming' is occurring. Consider a simplified example* of an item receiving ratings of 100, 50, & 0. The mean average rating would be 50. However, ratings of 55, 50 & 45 could also result in the same average. The second average might be more trusted because there is more consensus around a particular rating (a lower deviation).
(*In practice, some albums can have several thousand ratings)
This album has a Bayesian average rating of 71.0/100, a mean average of 69.6/100, and a trimmed mean (excluding outliers) of 70.9/100. The standard deviation for this album is 14.6.

Dirty jazz and driving bass mixed with an electronic element create a somewhat unique sound a little bit like if Captain Beefheart tried to be even a little bit accessible (and had the benefit of modern production). The impassioned vocals fit well within the variety of ideas that the band tries, some of which I find appealing some of which I think are missing something.

What a strange band name I thought when I discovered their album "Welfare Jazz". But as always, it's the music that counts and it's something special. A mixture of alternative rock, new wave and post-punk is offered here. Brutal and angry, the Swedes sweep from song to song. And sometimes a saxophone appears or a synthesizer peeks around the corner. It entertains and stands out from the crowd. Singer and frontman Sebastian Murphy shapes the songs considerably with his presence and manner. Defiant, arrogant and sometimes ironic or boozy and rotten.

My song recommendation:
"Ain't nice" The extremely danceable new wave album opener.
"Creatures" an extremely cool New Wave/Post-Punk song with socially critical lyrics.
"6 Shooter" a crazy and jazzed up instrumental.
"To the country" a slow simmering hymn for a life in the country.
"In spite of ourselfs" the rocking and sustained cover version of the Americana classic by John Prine and Iris DeMent here with Amy Taylor as duet partner.

The second album of the Swedish group is a genre-breaking and extremely listenable album. Entertaining, rocking and recommendable.

"Welfare Jazz" sets itself apart with it's weird mixture of Post-punk, Country and blues. I have never really heard this combination of sounds before. There is a nice little narrative inside able about learning to settle down and leave behind bad habits (maybe not entirely). The strange hound paranoia of "Secret Canine Agent" is fantastic with it's slashing saxophones and fast drums. Despite the unique sound and interesting narrative, most of the album sort of stays in peripheral level. Songs will begin and end the same way, making it hard for them to leave an effect. There are also several filler moments such as the 30 seconds of sax on "Cold Play". "Welfare Jazz" has interesting ideas but its execution keeps it out of true success.

Quite different from what I expected, it took me by surprise. Despite its creative, fresh and colourful sound, it makes for a rather "heavy" listen, it's not that well-suited for background music, it will grab your full-attention pretty quickly. Not sure how I'm feeling about the interludes, but I guess not much would be missed if they were omitted.

A really interesting album that takes punk mentalities and adds instrumentation that you'd never see in a project like this with horns and saxes and all sorts of weird nasty stuff. The lyrics are also a great standout just with how absurd most of them are. I mean where else could you hear "I'll borrow your stuff and never give it back. I'm kind of hungry can you give me a snack. I ain't nice."

70-80/100 (Really solid dance punk album. Has some killer tracks to dance to and some that may make you feel very sad - whilst still dancing - and sadly some songs/interlude tracks that seem a bit pointless.)

This was actually a very, very sad listen. I feel like this is an incredibly desperate, depressed, lost collection of songs. The words and songs seem to express the low down, hopeless feelings of people who have completely given up and accepted that they've lost any hope of redemption in their lives.

Well, I guess there are some silver linings in the form of love and an undying attempt to turn shit around. But I don't feel like these glimmers of hope seem to be going anywhere. They feel like daydreams, brief flights of fancy to take your mind off the gritty reality of life.

Basically, while listening to this there was a moment I went from kinda quasi-dancing and enjoying myself greatly to stopping still and feeling a sick sadness in my gut as I took in the misery in the vocalist and in the music. It's probably just a personal reaction, but it was very real for me.

Now as for the music its mostly really cool dance punk, high energy, funky, and cool. I love the creepy yet strangely affecting John Prine cover ("In Spite of Ourselves) especially love the squealing and crazy last half. I also love the extended instrumental jam of "6 Shooter", the song "Creatures" is the best fill-in for LCD Soundsystem that I've heard in a long while, the stupid fun of the opener "Ain't Nice" is strangely charming and pathetic all at once, and christ if "Boys & Girls" isn't the a towering track I don't know what is.

In this album there are quite a high amount of really great songs. But I am not a fan of some of the little throw-away songs. Some of these feel like interludes, but don't feel like they are necessary at all. I get nothing or close to nothing out of "Best In Show/Secret Canine Agent", This Old Dog" or "Cold Play". Maybe on further listens I'll get a better idea of the concept or flow they are stitching together with these tracks.

All in all I actually quite liked a majority of this album. This was my introduction to the band and I didn't know what to expect. This was a satisfactory enough listen that I may go and listen to more of their stuff. And any album with real stand out tracks like "Creatures", "In Spite Of Ourselves" "6 Shooter", "I Feel Alive" and "Girls & Boys" is a good album. This happens to be an album a bit weighed down by fluff. Still it packs an unexpected emotional punch.

Your feedback for Welfare Jazz