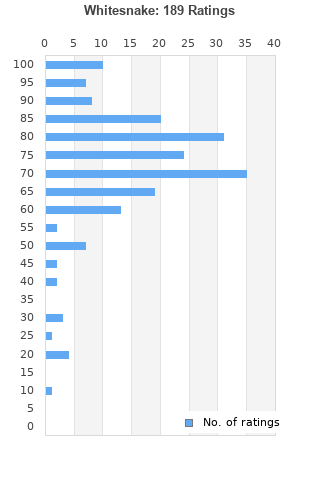 Whitesnake is ranked as the best album by Whitesnake. 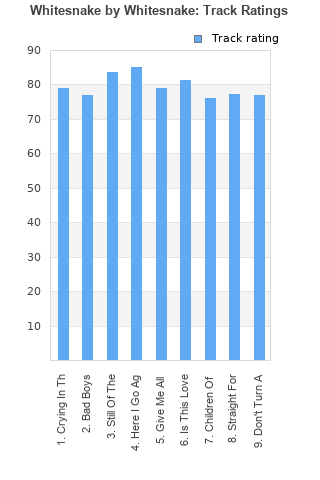 Rating metrics: Outliers can be removed when calculating a mean average to dampen the effects of ratings outside the normal distribution. This figure is provided as the trimmed mean. A high standard deviation can be legitimate, but can sometimes indicate 'gaming' is occurring. Consider a simplified example* of an item receiving ratings of 100, 50, & 0. The mean average rating would be 50. However, ratings of 55, 50 & 45 could also result in the same average. The second average might be more trusted because there is more consensus around a particular rating (a lower deviation).
(*In practice, some albums can have several thousand ratings)
This album has a Bayesian average rating of 71.7/100, a mean average of 71.3/100, and a trimmed mean (excluding outliers) of 71.6/100. The standard deviation for this album is 17.5.

This 25th anniversary compilation came on snakeskin look marbled vinyl! The music sounds as good as the vinyl looks! 'Here I Go Again' is a personal favourite with the huge keyboard textures through the intro and then the break into the driving rock and classic lead guitar solo that this song is so well known for.

I prefer the earlier stuff compared to this although it's a good album nevertheless,'Is This Love','Still of the Night' best here along with 'Looking for Love' which is on UK version.

Better than average hair metal, but there's no way this should be at the top of the Whitesnake heap. In previous years this group had integrity and put out some real quality blues-based rock.

This was on the MTV rotation back in the day 24/7. A lot of solid tracks. I'm not sure if I would call this glam metal or hair metal but I really look at this album and year being the end of both genres as mainstream music.

Still love this album after all these years. Great cover, also

This self-titled release contains a cheesy blend of Pink Floyd and Motley Crue -- hair metal all the way. They try to metal-rock hard, but it often leaves me with a wry smile.

In MTV's heyday these boys cleverly exploited the crotch of teenage boys everywhere. It worked. Although the rest isn't bad, the well known tracks 3, 4 and 5 is what makes this worth putting back on every now and then.

OK so he cheated by adding two old songs and 'updating' them to the sound of 1987, but even without those two songs, it is still a great album. And the video of Still Of The Night. I admit that 1987 was not a 'timeless' year and this album like Pyromania and Appetite For Destruction just don't seem to have the sound to last the distance.

Classic of the late 80s pop-metal scene. It still takes me back to the carefree cassette tape walkman days. It's overblown, it's silly, it takes itself too serious, and thats all part of what makes it fun to listen to. Great album to sing along to in the car.

Your feedback for Whitesnake