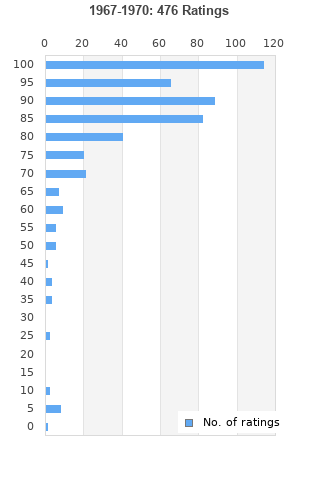 The best album by The Beatles is Abbey Road which is ranked number 3 in the list of all-time albums with a total rank score of 78,870. 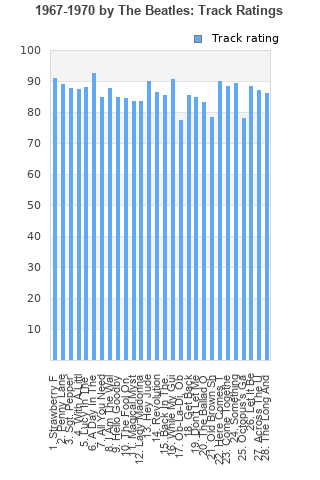 Rating metrics: Outliers can be removed when calculating a mean average to dampen the effects of ratings outside the normal distribution. This figure is provided as the trimmed mean. A high standard deviation can be legitimate, but can sometimes indicate 'gaming' is occurring. Consider a simplified example* of an item receiving ratings of 100, 50, & 0. The mean average rating would be 50. However, ratings of 55, 50 & 45 could also result in the same average. The second average might be more trusted because there is more consensus around a particular rating (a lower deviation).
(*In practice, some albums can have several thousand ratings)
This album is rated in the top 1% of all albums on BestEverAlbums.com. This album has a Bayesian average rating of 86.9/100, a mean average of 84.5/100, and a trimmed mean (excluding outliers) of 87.2/100. The standard deviation for this album is 18.8.

My favorite of all compilations. Every song an all time brilliant classic. And with 28 of them, that's pretty good. As golden as you can get.

A collection of classic Beatles songs. Forget the other comps, this is the best (along with red of course)

Best compilation by the best band of all time.

For me 1973 was Year I embraced the Beatles and the Red & Blue albums are the reason why...in hindsight are there better compilations; I.e. Anthology, Past Masters, Love, or number Ones? Maybe, it doesn’t matter as this was the starting point of my musical journey and I will always have a soft spot for both compilations.

Without a doubt the Beatles are one of the greatest bands ever. I confess to enjoying most of their songs. Still, there are only a few that really, really grab me the way songs from some other bands do. Back to the USSR, Here Comes the Sun and Come Together are my favourites.

Not a poor track

Garycottier, I get what you're saying, and do see the value in the album in that regard, but still don't think it should be rated so highly when only 6 tracks aren't on any previous albums. For Beatles singles and b-sides, I think the 1970 compilation Hey Jude is more worthwhile, as it contains all the new songs from this album as well as Paperback Writer and Rain.

To Onater. It's all very well saying, 'it's a compilation, get the real albums', but you obviously don't realise or have forgotten that the Beatles released a lot of singles(and their B-sides) that didn't appear on any albums. If you just get the 'real' albums you are going to miss out on songs such as, she loves you, I feel fine, paperback writer, hey Jude, the ballad of John and Yoko, I could go on. The Beatles compilations are essential if you want all the songs. Having said that, past masters, is the compilation to get as that mops up all the songs not included on the original albums, although 1967-1970 is probably a more coherent and enjoyable record. If you're a true Beatles fan, compilations are a must. .