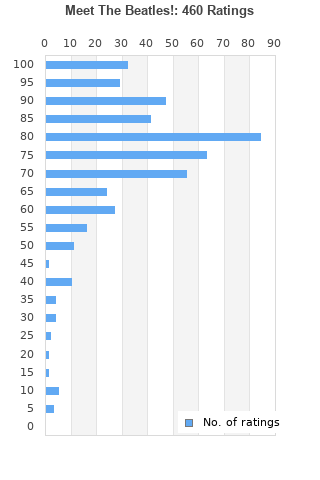 Meet The Beatles! is ranked 16th best out of 66 albums by The Beatles on BestEverAlbums.com.

The best album by The Beatles is Abbey Road which is ranked number 3 in the list of all-time albums with a total rank score of 74,877. 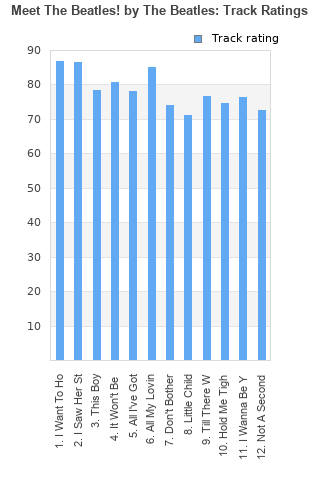 Rating metrics: Outliers can be removed when calculating a mean average to dampen the effects of ratings outside the normal distribution. This figure is provided as the trimmed mean. A high standard deviation can be legitimate, but can sometimes indicate 'gaming' is occurring. Consider a simplified example* of an item receiving ratings of 100, 50, & 0. The mean average rating would be 50. However, ratings of 55, 50 & 45 could also result in the same average. The second average might be more trusted because there is more consensus around a particular rating (a lower deviation).
(*In practice, some albums can have several thousand ratings)
This album is rated in the top 7% of all albums on BestEverAlbums.com. This album has a Bayesian average rating of 76.1/100, a mean average of 74.7/100, and a trimmed mean (excluding outliers) of 76.2/100. The standard deviation for this album is 18.0.

This would be close to top-tier if the second half was half as strong as the A side.

Good solid album not the best work but representative. Best songs: I Want To Hold Your Hand, I Saw Her Standing There, Don´t Bother Me.

The weakest? I tend to think so, and rarely listen to the album the whole way through. Love I'm a Loser though and I'll Follow the Sun is early McCartney magic.

The overwhelming impact in America of "I Want to Hold Your Hand" backed by the superb joyful rocker "I Saw Her Standing There" cannot be disputed. The Beatles new revolution of modernizing rock & roll begins here. But this record is much more than the power of that double-sided single.

The album that made british music popular in america

The one and only album my mother's mother allowed her to purchase - had the original vinyl. Not the best album but one with great memories- esp I wanna be your man - don't know when I found out Ringo sang the lead.

One of Capitol's hodgepodge albums. One of the better ones, actually. It would be a better album than With The Beatlea but the sound quality is really subpar as with the other Capitol albums.

Your feedback for Meet The Beatles!