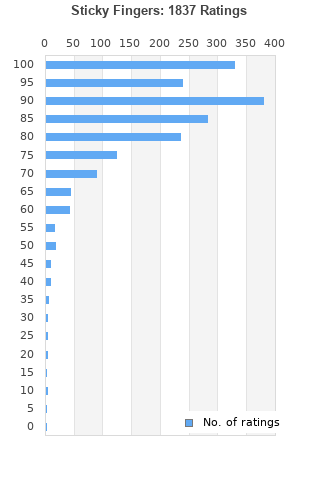 Sticky Fingers is ranked 2nd best out of 94 albums by The Rolling Stones on BestEverAlbums.com.

The best album by The Rolling Stones is Exile On Main St. which is ranked number 43 in the list of all-time albums with a total rank score of 26,841. 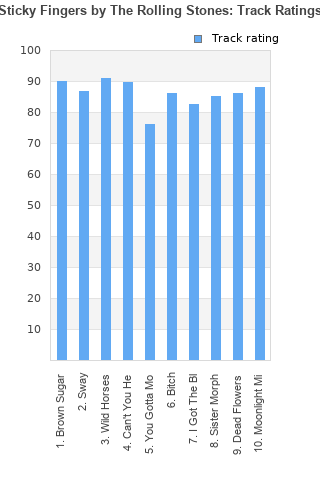 Rating metrics: Outliers can be removed when calculating a mean average to dampen the effects of ratings outside the normal distribution. This figure is provided as the trimmed mean. A high standard deviation can be legitimate, but can sometimes indicate 'gaming' is occurring. Consider a simplified example* of an item receiving ratings of 100, 50, & 0. The mean average rating would be 50. However, ratings of 55, 50 & 45 could also result in the same average. The second average might be more trusted because there is more consensus around a particular rating (a lower deviation).
(*In practice, some albums can have several thousand ratings)
This album is rated in the top 1% of all albums on BestEverAlbums.com. This album has a Bayesian average rating of 86.1/100, a mean average of 85.2/100, and a trimmed mean (excluding outliers) of 86.2/100. The standard deviation for this album is 13.7.

Some incredible songs on this album. Brown Sugar, Wild Horses, Moonlight Mile and Sway are the best for me. The intro on Brown Sugar is one of the best ever. What a way to start an album. And Moonlight Mile is a beautiful way to end. However You Gotta Move is just rubbish, total filler. It's the only weak point of an awesome album though.

After Wild Horses, you expect the album to start getting dull, but that’s when the interesting stuff begins.

Easily the best album from Rolling Stones. It is absolutely flawless with incredible songwriting and delivery. It takes the brilliance of their live performances and harnesses that energy for this album.

Good album, second best of the Stones for me. Brown Sugar is an amazing opener, and Wild Horses, sister Morphine is also two great songs. Moonlight mile is a perfect ender, and not any bad songs on here in my opinion

My second favorite album from them, there is more than 3 good songs like on previous albums. My fav tracks: Wild Horses, Can't You Hear Me Knocking, Sister Morphine.
My least fav is You Gotta Move which ia really awful and I Got The Blues is a simple filler for me.

It was undoubtedly a difficult period for the Stones, as they had just weathered the storm of Brian Jones' death and a search for his replacement. Nevertheless, it was perfect timing for the entrance of guitarist Mick Taylor into the band, being that the era's music was defined by strong musicianship and songs with extended time and eclectic guitar solos. Sticky Fingers wasn't the first Stones' album to feature Taylor, but it was the first studio album on which he played throughout. And a strong presence he was. His lead work alongside the signature riffs and rhythms of Keith Richards helped to make it one of the Stones' best albums.

Your feedback for Sticky Fingers