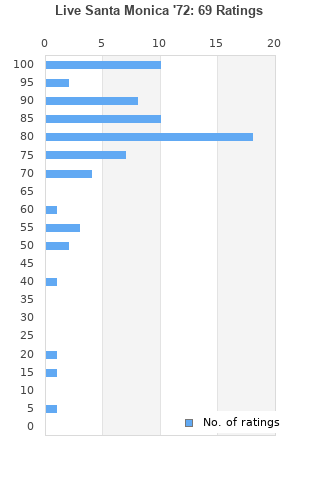 Live Santa Monica '72 is ranked 43rd best out of 88 albums by David Bowie on BestEverAlbums.com. 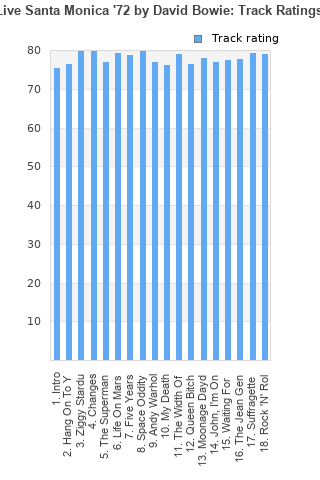 Rating metrics: Outliers can be removed when calculating a mean average to dampen the effects of ratings outside the normal distribution. This figure is provided as the trimmed mean. A high standard deviation can be legitimate, but can sometimes indicate 'gaming' is occurring. Consider a simplified example* of an item receiving ratings of 100, 50, & 0. The mean average rating would be 50. However, ratings of 55, 50 & 45 could also result in the same average. The second average might be more trusted because there is more consensus around a particular rating (a lower deviation).
(*In practice, some albums can have several thousand ratings)
This album is rated in the top 1% of all albums on BestEverAlbums.com. This album has a Bayesian average rating of 80.7/100, a mean average of 78.9/100, and a trimmed mean (excluding outliers) of 82.0/100. The standard deviation for this album is 19.1.

A superb live album, and my favourite Bowie period is from 1970-75 so it must buy album for me.

This is great Ziggy recording. Seems they gave him lobster?

A great ignored Bowie record. Why did it take so long to release this fantastic album? A must listen for any Bowie fan.

Absolutely fantastic live recording by this singer! Changes, 5 Years, Space Oddity, My Death, The Jean Genie and Suffragette City all superior live versions here. The finale is amazing too! If you like the Bowie 70s run this album is a must listen. It just is, like really really is.

Your feedback for Live Santa Monica '72