Cut (studio album) by The Slits 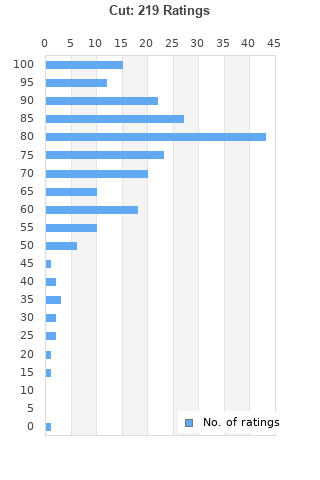 Cut is ranked as the best album by The Slits. 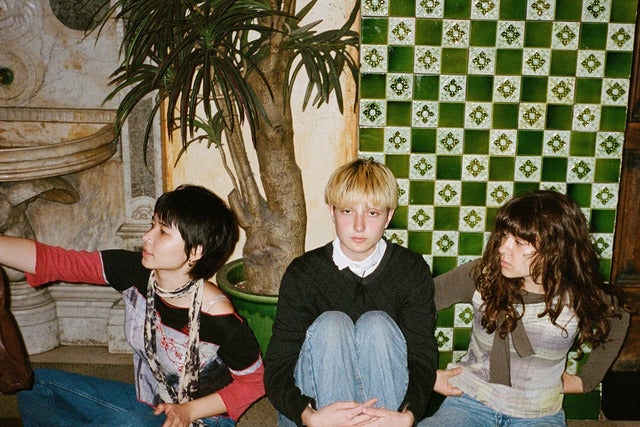 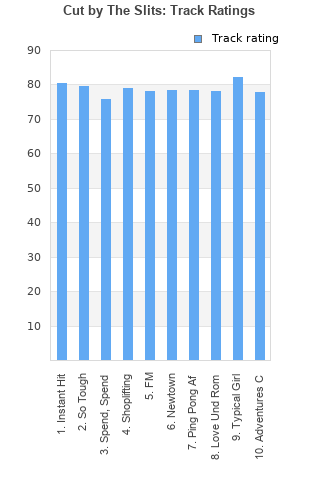 Rating metrics: Outliers can be removed when calculating a mean average to dampen the effects of ratings outside the normal distribution. This figure is provided as the trimmed mean. A high standard deviation can be legitimate, but can sometimes indicate 'gaming' is occurring. Consider a simplified example* of an item receiving ratings of 100, 50, & 0. The mean average rating would be 50. However, ratings of 55, 50 & 45 could also result in the same average. The second average might be more trusted because there is more consensus around a particular rating (a lower deviation).
(*In practice, some albums can have several thousand ratings)
This album is rated in the top 6% of all albums on BestEverAlbums.com. This album has a Bayesian average rating of 76.7/100, a mean average of 75.7/100, and a trimmed mean (excluding outliers) of 76.9/100. The standard deviation for this album is 16.8.

More fun and tuneful than I expected.

Brash, loud, and a bit irritating. The Slits are about as charming as the Sex Pistols, which is to say they aren't. The songwriting is pretty alright, but the album really suffers from overbearing vocals.

Reminds me of when I used to walk home alone from primary school and trios of girls from the local comprehensive would be heading in the opposite direction, making for town and trouble.

A wonderfully quirky alternative rock/reggae album, if you can call it that. It still sounds utterly unique, although it is obviously a very influential LP. All the tracks make their mark and there is always something new to hear every time you listen to it. How does it do that?

Has it's moments and is often labeled with the hugely influential tag (perhaps more in attitude then the music itself). It's certainly an interesting album that I'm still not quite sure how to rate. If their supposed lack of musical ability is true, then they've put the careers of a lot of bands to shame with the amount of invention displayed here in just over 30 minutes.

Your feedback for Cut