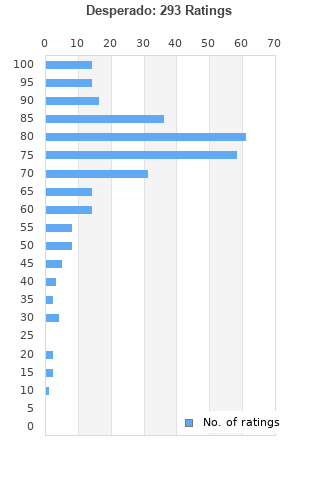 Desperado is ranked 3rd best out of 17 albums by Eagles on BestEverAlbums.com. 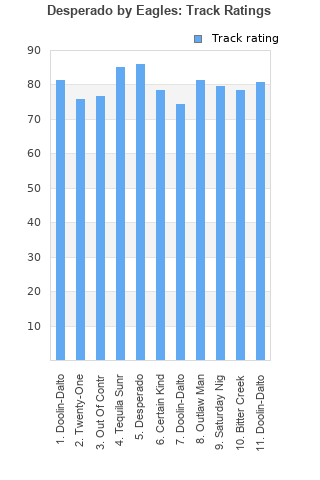 Rating metrics: Outliers can be removed when calculating a mean average to dampen the effects of ratings outside the normal distribution. This figure is provided as the trimmed mean. A high standard deviation can be legitimate, but can sometimes indicate 'gaming' is occurring. Consider a simplified example* of an item receiving ratings of 100, 50, & 0. The mean average rating would be 50. However, ratings of 55, 50 & 45 could also result in the same average. The second average might be more trusted because there is more consensus around a particular rating (a lower deviation).
(*In practice, some albums can have several thousand ratings)
This album is rated in the top 9% of all albums on BestEverAlbums.com. This album has a Bayesian average rating of 75.6/100, a mean average of 74.9/100, and a trimmed mean (excluding outliers) of 75.7/100. The standard deviation for this album is 15.5.

What could I say? I love these guys! With them, always wonderful vocalizations and very well recorded guitars. My form of analysis is: if there are 4 or more quality songs (as I know that an album is almost always unlikely to be perfect), and if there is a good production (good arrangements, good recording and good mixing), the score is maximum! And this album has it all, in addition to 5 songs of great potential (Doolin-Dalton, Tequila Sunrise, Desperado, Certain Kind of Fool and Bitter Creek).

Strong sophomore release. The title cut is one of the greatest ballads of all time.

The Eagles at their best!

One of their better albums especially side 2 (Tracks 6-11)they merge into one another and it gives an Americana feeling to the album. In saying that Tequila Sunrise And Desperado are great cuts along with Doolin' Dalton from Side 1.

The Eagles second album is a concept album about the Doolin-Dalton gang. Who cares? Anyway, some fine songs here, especially the title track and, tequila sunrise. The Eagles never made a stunning grade A album, they were always a better singles band, still, this is one of their better efforts.

My favorite Eagles album. I think the concept works well here, contrary to some others. It's not exactly How the West Was Won, but not bad for a rock band's old west concept album. Outlaw Man is a great song, and Tequila Sunrise, Desperado, Out of Control and Saturday Night are no slouches, either.

This album has a bunch of good tracks, but nothing groundbreaking.

Concept kind of falls apart but this is a great collection of songs.

Your feedback for Desperado