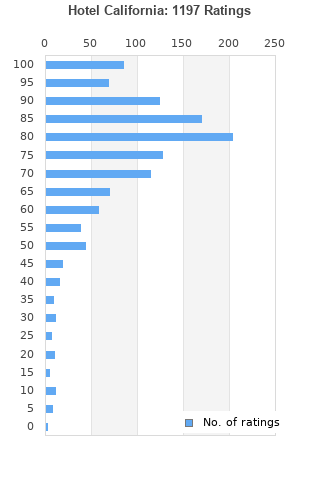 Hotel California is ranked as the best album by Eagles. 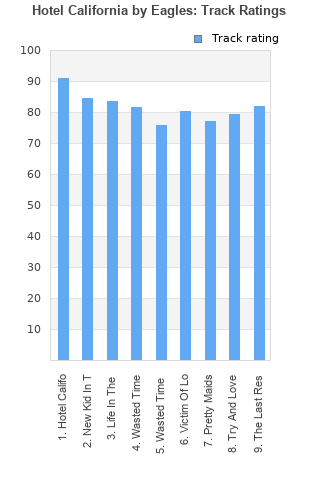 Rating metrics: Outliers can be removed when calculating a mean average to dampen the effects of ratings outside the normal distribution. This figure is provided as the trimmed mean. A high standard deviation can be legitimate, but can sometimes indicate 'gaming' is occurring. Consider a simplified example* of an item receiving ratings of 100, 50, & 0. The mean average rating would be 50. However, ratings of 55, 50 & 45 could also result in the same average. The second average might be more trusted because there is more consensus around a particular rating (a lower deviation).
(*In practice, some albums can have several thousand ratings)
This album is rated in the top 7% of all albums on BestEverAlbums.com. This album has a Bayesian average rating of 76.0/100, a mean average of 74.7/100, and a trimmed mean (excluding outliers) of 76.0/100. The standard deviation for this album is 18.8.

I guess the album has a theme (drugs are bad, don’t trash the planet) but it sure ain’t as deep as the band thinks it is. If you like trite soft rock, this is the record for you!

This album has this one great track which is Hotel California and the rest of it suffers being compared to this one, because they can't come close to it. But there are some other good tracks on here, however I think it's overrated some albums that are lower ranked in 1976 are better.

Classic album. The Last Resort is my favourite track.

I bought this album exactly 45 years ago, and my first impression, not impressed, because there were so many ballads, and the second side was left almost unplayed.
Hence I can easily say that this is one of the most overrated albums of all time. It has 2 good songs and 2 mediocre. The rest are just throwaways.
GOOD:
- Hotel California
- New Kid in Town
Moderate
- Life in the fast lane
- Wasted time (barely)

The title track is amazing, the guitar work is stunning. The rest doesn't hit the same high, but it's still got a handful of great songs.

Title track is a classic no doubt about that, New Kid is good too, Victim of love and Fast Lane are ok.

Your feedback for Hotel California