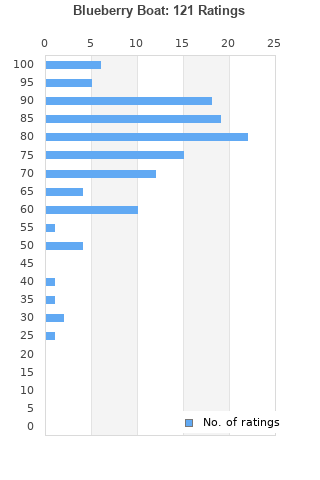 Blueberry Boat is ranked as the best album by The Fiery Furnaces. 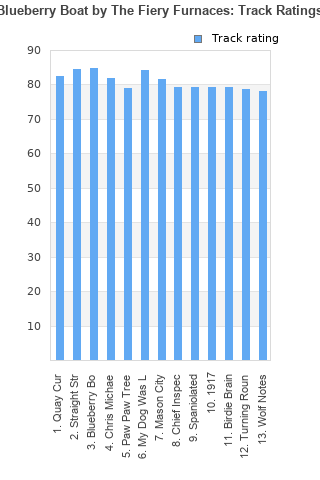 Outliers can be removed when calculating a mean average to dampen the effects of ratings outside the normal distribution. This figure is provided as the trimmed mean. A high standard deviation can be legitimate, but can sometimes indicate 'gaming' is occurring. Consider a simplified example* of an item receiving ratings of 100, 50, & 0. The mean average rating would be 50. However, ratings of 55, 50 & 45 could also result in the same average. The second average might be more trusted because there is more consensus around a particular rating (a lower deviation).
(*In practice, some albums can have several thousand ratings)
This album is rated in the top 3% of albums on BestEverAlbums.com. This album has a mean average rating of 77.0/100. The trimmed mean (excluding outliers) is 78.7/100. The standard deviation for this album is 15.1.

Showing latest 10 comments | Show all 14 comments | Most Helpful First | Newest First
(Only showing comments with -2 votes or higher. You can alter this threshold from your profile page. Manage Profile)

I remember first hearing this around when it came out and thinking "WTF?!" because the songwriting is so jarring and each song can contain up to (what feels like) ten different songs. After many listens I really got into it. I think it's a vastly underrated album. Recently listened to it again and feel that way even more so. I suggest giving it 10-20 listens before judging it. The first half of the record is solid. It's only failing is that some of the last half isn't as strong. Yet another example of long albums that would have been made better by being shorter.

This an experimental masterwork. Why is it not talked about more? I'm going to throw a massive "underrated" at this one.

I checked out when I heard "The pain, the pain, in Spain falls mainly on me." Gross.

Pitchfork have rated this album 9.6/10, so it's perfectly normal that I don't really get into this album and find it nothing more than correct...

This album proves for me that even the music community is not purely deterministic; the truly great music will not always rise to the top. This album was initially met with either unnaturally high ratings or quite low ones. I saw on Metacritic that NME (but, seriously, screw NME) called it "Toe-curlingly unlistenable" whereas, say, Pitchfork gave it the rare score of 9.6 (the only albums to receive a 9.6 or higher since then are Funeral by Arcade Fire, Merriweather Post-Pavilion by Animal Collective, and My Beautiful Dark Twisted Fantasy by Kanye West, all of which are in the BEA top 100). So how did this album drop out of this canon of classics? It disappeared slowly. After both of the albums were released, Pitchfork released a list of the best albums from 2000-04 placing Blueberry Boat HIGHER than Funeral. At the year end, they put Funeral at #1 and Blueberry Boat at the still formidable #4. By the decade's end, Funeral was at #2 for the 2000s and Blueberry Boat sat all the way down at #145. The thing is that critics know this is a great album. It almost escapes the grasp of exegesis. But the general public somehow gets away with claims of it being "Too long" or "Too dense." This has pulled it out of sight. I'm not saying that Blueberry Boat is better than Funeral. I think it's close. But I definitely think it ranks higher than 2,047 (its current rank on BEA).

Weird album! Overall didn't work for me but there's good moments. Also too long I think. Too long.

It's weird how a song you really don't think about that often can become very important all of a sudden. I lost my dog last night and the last like 12 hours have been 12 of the most stressful. She's just been found safe and sound about 15 minutes ago to my great relief, and now I can look back and actually appreciate the horrible song that has been in my head for the last half day non-stop (My Dog Was Lost But Now He's Found.)

Starts like a nursery rhyme but slowly mutates, Tetsuo style, until you are consumed by it's madness. 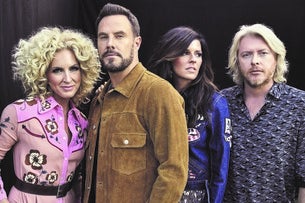 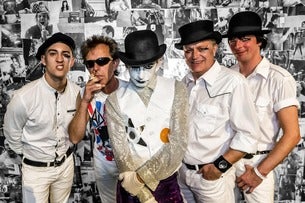 Your feedback for Blueberry Boat