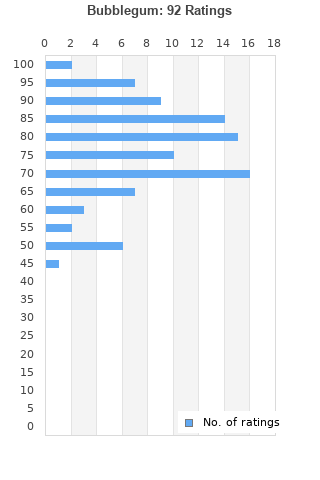 Bubblegum is ranked as the best album by Mark Lanegan Band.

Tickets from Ticketmaster Get tickets
May
26
Thu
20:00 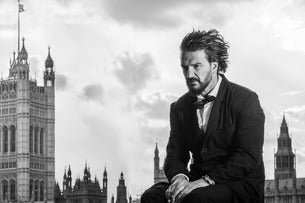 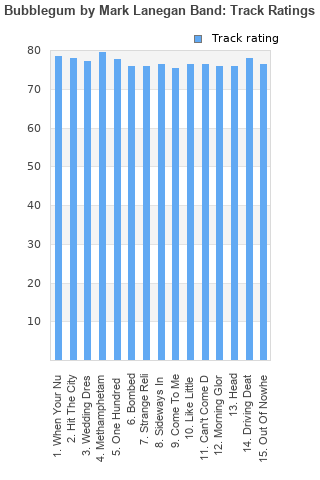 Rating metrics: Outliers can be removed when calculating a mean average to dampen the effects of ratings outside the normal distribution. This figure is provided as the trimmed mean. A high standard deviation can be legitimate, but can sometimes indicate 'gaming' is occurring. Consider a simplified example* of an item receiving ratings of 100, 50, & 0. The mean average rating would be 50. However, ratings of 55, 50 & 45 could also result in the same average. The second average might be more trusted because there is more consensus around a particular rating (a lower deviation).
(*In practice, some albums can have several thousand ratings)
This album is rated in the top 6% of all albums on BestEverAlbums.com. This album has a Bayesian average rating of 76.4/100, a mean average of 76.8/100, and a trimmed mean (excluding outliers) of 76.8/100. The standard deviation for this album is 12.8.

Mark Lanegan at his best if you ask me...

I hadn't heard this for about 4 years. There's some good stuff on here, but nothing that makes it stand out for me. Even the duet with PJ Harvey (who I really like) left me a bit flat.

His presence is so commanding to the point of making you uncomfortable. Too heavy and too intense for the chicken-livered (like me).

Can't believe this is ranked so low. What a travesty! This is the blues and rock fused in the deep dark furnace of Lanegan's soul. Quality!

Lanegan has one of greatest rock voices of all times, and he uses it at his best on this album. A blast from beginning till end, and another great duet (this time with PJ Harvey).

Would trade this album for the entire top 20 of 2004, apart from the Arcade Fire and Nick Cave albums.

Bought this today- love it. Methamphetamine Blues is mental.

Mark to his greatest inspiration.

Your feedback for Bubblegum