Under The Table And Dreaming (studio album) by Dave Matthews Band

Under The Table And Dreaming by Dave Matthews Band
Year: 1994
Overall rank: 2,185th 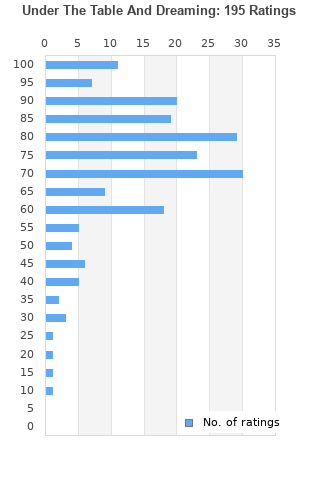 Under The Table And Dreaming is ranked 2nd best out of 60 albums by Dave Matthews Band on BestEverAlbums.com.

The best album by Dave Matthews Band is Crash which is ranked number 1476 in the list of all-time albums with a total rank score of 1,204.

Listen to Under The Table And Dreaming on YouTube 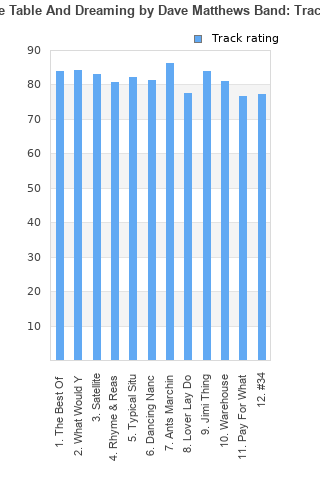 Under The Table And Dreaming rankings

Under The Table And Dreaming collection

Under The Table And Dreaming ratings

Rating metrics: Outliers can be removed when calculating a mean average to dampen the effects of ratings outside the normal distribution. This figure is provided as the trimmed mean. A high standard deviation can be legitimate, but can sometimes indicate 'gaming' is occurring. Consider a simplified example* of an item receiving ratings of 100, 50, & 0. The mean average rating would be 50. However, ratings of 55, 50 & 45 could also result in the same average. The second average might be more trusted because there is more consensus around a particular rating (a lower deviation).
(*In practice, some albums can have several thousand ratings)
This album has a Bayesian average rating of 73.1/100, a mean average of 72.4/100, and a trimmed mean (excluding outliers) of 73.0/100. The standard deviation for this album is 17.6.

Under The Table And Dreaming favourites

Under The Table And Dreaming comments

I never bought this album yet I can sing nearly every song by heart. This was probably THE most ubiquitous album on college campuses in the mid 90s. Hard to underestimate just how much it permeated the scene.

Your deejay days are long past. You're pointed toward the rear ... CAreer and child REARing. Then this album shows up and bites you on the ass to say, "Wake Up." Get out from under the table, because music is still growing and thriving with or without you.

It's funny. Ants Marching is a bit too country white people fiddle happy for me. Not my fav. Liked Satellite and What Would you Say a bit more.

One of the best college radio jam band albums. DMB in the will polish their sound and the production of their music in the future. This is still great stuff.

This had huge singles in What Would You Say and Satellite

Ants Marching is probably their best and most well known song.

Jimi Thing is your typical lets get high song

Lover Lay Down and 34 are throways.

Warehouse has great verses but the island sounding chorus is a bit of a let down. Good song though.

Busted Stuff is their best album. People don't know about it, many gave up after Everyday.

Brilliant, everyone liked this album when I had 14. So much that they stole it one time my friends came to my house. I was dissapointed when I knew I couldn't hear it with Spotify (At least, in the country where I live).

This album was released the year I went off to college. Girls really like this album, I really like girls, Do the math... I listened to this one a lot!

Decent, but not quite at the level of the next two.

This is DMB's best, and spawned a lot of imitators in the 90s and 2000s. To really get this band though you need to see them live.

Solid record, full of classic DMB. One of my band favs.

DMB's first studio album, and it's a very good one. A ton of classic songs, including some of the best of the 90s.

Your feedback for Under The Table And Dreaming