Before These Crowded Streets (album) by Dave Matthews Band 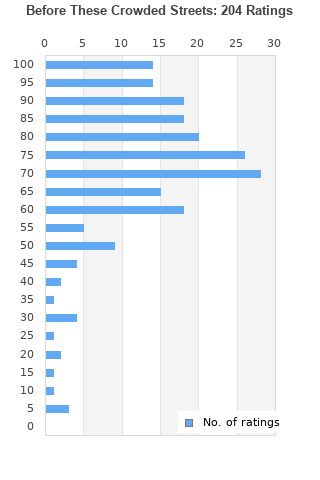 Before These Crowded Streets is ranked 3rd best out of 60 albums by Dave Matthews Band on BestEverAlbums.com.

The best album by Dave Matthews Band is Crash which is ranked number 1143 in the list of all-time albums with a total rank score of 1,564. 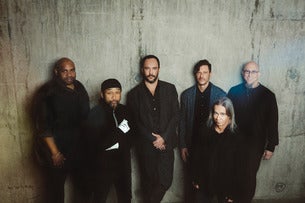 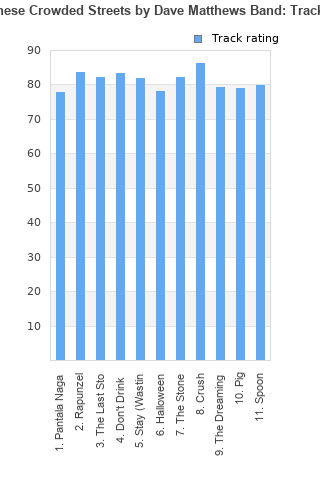 Before These Crowded Streets rankings

Before These Crowded Streets collection

Before These Crowded Streets ratings

Rating metrics: Outliers can be removed when calculating a mean average to dampen the effects of ratings outside the normal distribution. This figure is provided as the trimmed mean. A high standard deviation can be legitimate, but can sometimes indicate 'gaming' is occurring. Consider a simplified example* of an item receiving ratings of 100, 50, & 0. The mean average rating would be 50. However, ratings of 55, 50 & 45 could also result in the same average. The second average might be more trusted because there is more consensus around a particular rating (a lower deviation).
(*In practice, some albums can have several thousand ratings)
This album has a mean average rating of 73.0/100. The trimmed mean (excluding outliers) is 73.9/100. The standard deviation for this album is 19.9.

Before These Crowded Streets favourites

Before These Crowded Streets comments

After a couple of albums of bright, jazzy jams, this album is much darker. The addition of a greater variety of sounds makes this the closest thing they've done to a world music album. But it's still DMB: the average track length is just under seven minutes and the virtuoso playing still shines through. One of their best.

DMB's 3rd album is darker, less accessible, more complex and musically more complicated than any other album they have.

The 2 previous albums were high on whimsy and good times. Dave is angry here and charged up with political injustices.

This album proved that DMB are more technically skilled than a college jam band, but I don't listen to this album from beginning to end.

Halloween is uncomfortable; a growling groveling Dave Matthews is not pleasant on the ears. Great atmosphere for what he wants to convey but I don't want to hear it more than once

What comes after lacks hooks and is unmemorable.

The top 3 songs are keepers though on a DMB playlist.

There are some great moments, and some boring moments, on this one. At 70 minutes, this could've been shaved into a much tighter album, not necessarily cutting songs, as they all have their moments, but trimming down the excess a bit.

But then it wouldn't exactly be a Dave Matthews Band album, would it?

This is a great and complex album. This is the first DMB studio album that sounded like it was made for the studio. Really fine stuff.

After making two great albums of upbeat party jam music, the DMB decided to get serious and somber. The album is brilliant from start to finish. Great music that compliments to tone of each of the songs. Musical interludes between many of the songs provide transitions to make this album a complete unified piece.

A real, angry, politically charged and melodic album from Dave Matthews? Yep. This is worth the rest of his catalog put together. "Don;'t Drink The Water" is brilliant.

Sure, DMB can be prone to long-winded jams, but this album is suprisingly brilliant, with complex rhythms, good use of musical tension, and exotic time signatures (The Dreaming Tree is in 7/8).

Your feedback for Before These Crowded Streets