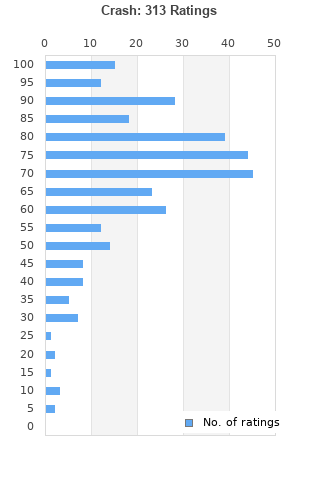 Crash is ranked as the best album by Dave Matthews Band. 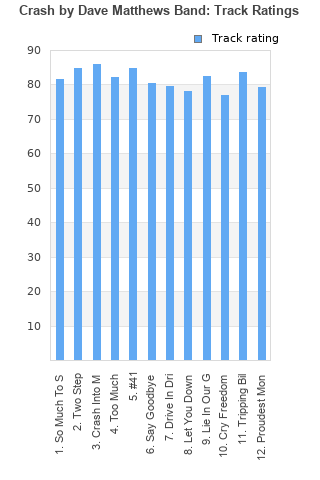 Rating metrics: Outliers can be removed when calculating a mean average to dampen the effects of ratings outside the normal distribution. This figure is provided as the trimmed mean. A high standard deviation can be legitimate, but can sometimes indicate 'gaming' is occurring. Consider a simplified example* of an item receiving ratings of 100, 50, & 0. The mean average rating would be 50. However, ratings of 55, 50 & 45 could also result in the same average. The second average might be more trusted because there is more consensus around a particular rating (a lower deviation).
(*In practice, some albums can have several thousand ratings)
This album has a Bayesian average rating of 71.1/100, a mean average of 70.0/100, and a trimmed mean (excluding outliers) of 71.1/100. The standard deviation for this album is 19.1.

I got into these guys watching some live video of theirs. Amazing performances/musicianship. The songwriting is ok. Very 90s feel on this record and kinda not in a good way. My sister makes fun of it and says only people that wear Birkenstock sandals and blueberry beer will listen to this album. You must also have a jean button up shirt or jean jacket while listening to it.

First 4 songs are possibly the most solid on the album for this time around.

Dave Matthews and his jam band release the sequel to Under The Table and Dreaming. The production here is better and the whole thing sounds more professional than the debut.

It's sound is consistent with their first release and Carter Beauford is one of the best drummers I have ever heard.

DMB gets unfairly roped into the college jam band grouping which minimizes their talent. They do that well too, but these are smart layered pop rock songs as well.

There are more dud songs here than the debut so I prefer Under the Table over this.

Cry Freedom, Proudest Monkey, Say Goodbye and Let You Down are all below average songs.

The Rest of this is excellent.

I rank it 3rd behind Busted Stuff and Under the Table

Great Pop-rock record. The drumming is fantastic. The record also has an odd vibe to it, sort of purple and shadowy, but not morose...

Definitely their best. Before These Crowded Streets has greater highs, but Crash is the group's magnum opus. The first half is simply fantastic, with some of the group's best work (Two Step, Crash, #41). The second half falters a bit, but Lie in Our Graves is great. If the group could have edited down the more meandering tracks like Proudest Monkey, this would be one of the best of the 1990s for me. Even so, it's one of my personal favorites.

For mid-90s safe-as-milk songwriter jam-rock, this is actually not that bad. Easy to like and listen to.

DMB are one of those bands that you have to see live to fully appreciate. And this album comes closest to capturing their live sound. The interplay between the instruments feels more spontaneous that on Under the Table and Dreaming (which is also excellent).

This is a fair album but I don't think it has the staying power to be considered truly great. Under the table and dreaming is better overall

I liked it better ten plus years ago when I was in high school.

Not sure why many of these songs are getting average ratings in the high 70s. This album is awesome. Not a bad song on it and some great hits. Crash Into Me probably my favorite Dave Matthews Band song.

How this album has an overall rating of only 70 is beyond me. Isn't this their best selling if not top 3 best selling album of their careers? This site needs more DMB fans.

Your feedback for Crash