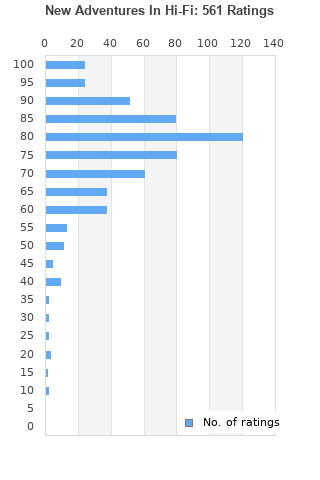 New Adventures in Hi-Fi by R.E.M. CD, Sep-1996, Warner Bros.
Condition: Very Good
Time left: 3h 52m 48s
Ships to: Worldwide
$4.24
Go to store
Product prices and availability are accurate as of the date indicated and are subject to change. Any price and availability information displayed on the linked website at the time of purchase will apply to the purchase of this product.  See full search results on eBay

New Adventures In Hi-Fi is ranked 8th best out of 35 albums by R.E.M. on BestEverAlbums.com.

The best album by R.E.M. is Automatic For The People which is ranked number 56 in the list of all-time albums with a total rank score of 22,800. 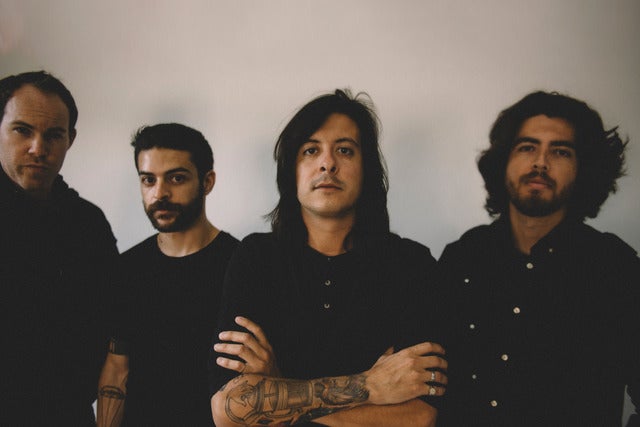 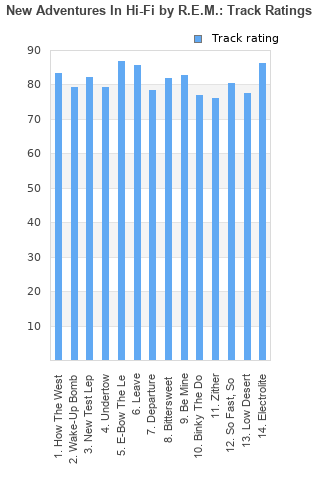 #
Track
Rating/Comments
1.
How The West Was Won And Where It Got Us
Rating: 84 (98 votes)Comments:

Rating metrics: Outliers can be removed when calculating a mean average to dampen the effects of ratings outside the normal distribution. This figure is provided as the trimmed mean. A high standard deviation can be legitimate, but can sometimes indicate 'gaming' is occurring. Consider a simplified example* of an item receiving ratings of 100, 50, & 0. The mean average rating would be 50. However, ratings of 55, 50 & 45 could also result in the same average. The second average might be more trusted because there is more consensus around a particular rating (a lower deviation).
(*In practice, some albums can have several thousand ratings)
This album is rated in the top 5% of all albums on BestEverAlbums.com. This album has a Bayesian average rating of 77.1/100, a mean average of 76.2/100, and a trimmed mean (excluding outliers) of 77.2/100. The standard deviation for this album is 14.3.

I was around 11/12 years old the first time i heard this album. When it got to Leave, i couldn't believe how amazing it was... It's a miracle this song exists.

Over the years i have begun to like R.E.M more and more, and this album does not disappoint .From the moment i started listening to it i was hook. Not a bad track on it.

Really under-rated album. Some similarities to Monster in that the distortion and fuzz are present on several tracks but there is a softening to the edges more reminiscent to late 80's R.E.M. A top notch album deserving a higher placing in the charts

Geez this album was a surprising delight. Them hooks! Them melodies! Just beautiful.

A really great album, there is nothing that really stands out, and all songs are pretty consistent. But clocking in at 65:33, REM doesn't pull out enough tricks to keep me satisfied all the way through, and the album does drone on at some parts, but the will come bouncing back.

Follow up to the magnificent Monster this is R.E.M. at their best minimum fuss just straight forward rock music with touches of Automatic/monster/Life's Rich Pageant scattered around. Recorded after the Monster tour and written on the road it has a loose live feeling and all the tracks add up to make the whole album a tight sounding piece. Standout tracks E-bow the Letter, New Test Leper, Leave, Binky the Doormat & Electrolite. The remainder of the album is also good.

A way underrated album. They took a chance as artists and the critics trashed it. Sophisticated production with the usual intelligent lyrics make this record a gem.

REM's excellent follow up to monster. New adventures in hi-fi, was recorded during the band's world tour of 1995/96, and features songs recorded live, at soundchecks, and in various recording studios. The album opens deceptively with, how the west was won and where it got us, which probably wouldn't have sounded out of place on their next release, up. It's with the second track, wake up bomb, where the album starts to reveal it's true identity, it's a barnstorming rocker, similar to the sound on, monster. Other tracks along these lines are, undertow, Binky the doormat, and the excellent, so fast, so numb. Through this rock'n'roll haze, are some of REM's loveliest moments. Be mine, is good, but, electrolite, and, new test leper, are superb, arguably the best two songs on the album. Other standouts are the epic, leave, and the stoned drone of e-bow,the letter. There are a few throaways, departure, and, low desert, are hardly essential REM, but they're ok. This would be their last album with drummer Bill Berry, and would never quite be the same band again. Still, a brilliant record, one of their best.

This can sometimes be very beautiful

Your feedback for New Adventures In Hi-Fi