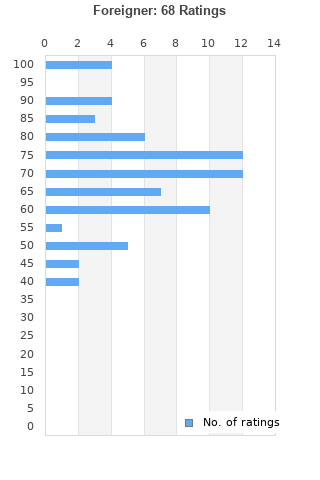 PROMO WHITE LABEL CAT STEVENS FOREIGNER JAPAN OBI
Condition: Used
Time left: 8h 9m 37s
Ships to: Worldwide
$149.99
Go to store
Product prices and availability are accurate as of the date indicated and are subject to change. Any price and availability information displayed on the linked website at the time of purchase will apply to the purchase of this product.  See full search results on eBay

Foreigner is ranked 6th best out of 19 albums by Cat Stevens on BestEverAlbums.com.

The best album by Cat Stevens is Tea For The Tillerman which is ranked number 481 in the list of all-time albums with a total rank score of 3,941. 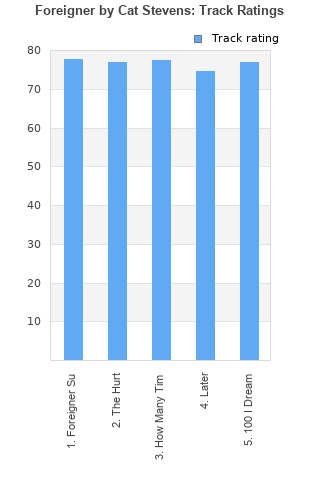 Rating metrics: Outliers can be removed when calculating a mean average to dampen the effects of ratings outside the normal distribution. This figure is provided as the trimmed mean. A high standard deviation can be legitimate, but can sometimes indicate 'gaming' is occurring. Consider a simplified example* of an item receiving ratings of 100, 50, & 0. The mean average rating would be 50. However, ratings of 55, 50 & 45 could also result in the same average. The second average might be more trusted because there is more consensus around a particular rating (a lower deviation).
(*In practice, some albums can have several thousand ratings)
This album has a Bayesian average rating of 71.1/100, a mean average of 70.8/100, and a trimmed mean (excluding outliers) of 70.8/100. The standard deviation for this album is 14.0.

It doesn't stand up to Teaser and Tea but I think maybe his third best. No major hits on this but everything on it is good

Every few years I try to raise my opinion of this, feeling bad that I can't. Cause I love his albums surrounding this one. But the songs just aren't very good. Only The Hurt has any of the qualities of his better songwriting. But his next album had tons of quality songs to make up for it. It sounds alright tho.

Overlooked and underrated album by Cat Stevens. None of his most catchy songs or hits here, but still very strong songwriting and empassioned performances. The title suite is his take on the side-long piece not uncommon for the time, this being ambitious without feeling pretentious or self-indulgent.

EP but still a solid effort.

Your feedback for Foreigner