Tea For The Tillerman (studio album) by Cat Stevens 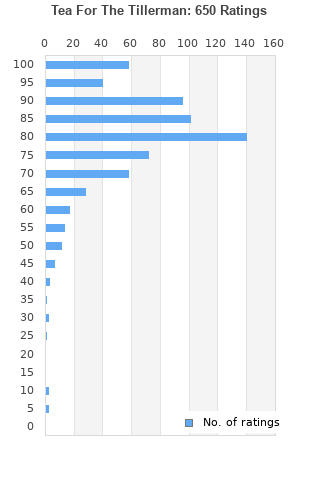 CAT STEVENS COLLECTION TEA FOR TILLERMAN DELUXE PROMO + TEASER & THE FIRECAT CD
Condition: Very Good
Time left: 11h 12m 14s
Ships to: Worldwide
£34.99
Go to store
Product prices and availability are accurate as of the date indicated and are subject to change. Any price and availability information displayed on the linked website at the time of purchase will apply to the purchase of this product.  See full search results on eBay

Tea For The Tillerman is ranked as the best album by Cat Stevens. 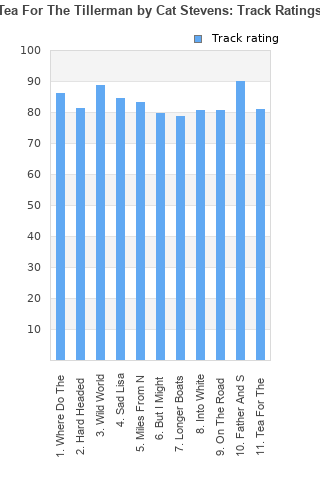 Tea For The Tillerman rankings

Tea For The Tillerman collection

Tea For The Tillerman ratings

Rating metrics: Outliers can be removed when calculating a mean average to dampen the effects of ratings outside the normal distribution. This figure is provided as the trimmed mean. A high standard deviation can be legitimate, but can sometimes indicate 'gaming' is occurring. Consider a simplified example* of an item receiving ratings of 100, 50, & 0. The mean average rating would be 50. However, ratings of 55, 50 & 45 could also result in the same average. The second average might be more trusted because there is more consensus around a particular rating (a lower deviation).
(*In practice, some albums can have several thousand ratings)
This album is rated in the top 1% of all albums on BestEverAlbums.com. This album has a Bayesian average rating of 80.9/100, a mean average of 80.2/100, and a trimmed mean (excluding outliers) of 81.1/100. The standard deviation for this album is 14.2.

Tea For The Tillerman favourites

Tea For The Tillerman comments

Very good Cat Stevens is like a teacher when he sings Father And Son from this song you can learn very much for life but the first song is also good where do the children play and the last track Tea For The Tillerman a classical music pieces. A must have in every collection. I say very favorable and music shaping for the time of it's release.

Top Tracks: "Where Do the Children Play?", "Father and Son", "Tea for the Tillerman"

Beautiful, melodic songs with some incredible lyrics and powerful, emotive singing. One of the best folk or pop albums of the 1970s, without a doubt.

Someone here commented "A gospel choir has to cover this entire album at my funeral", really without exaggeration, this album seems to be spiritual, it's like a compilation due to the quantity of great songs, with a difference, it's a portrait of a specific moment, without the coldness of a collection of songs, is full of dynamics and depth, masterpiece.

Easily Cat's most consistent and definitive album, this one has him demonstrating mastery as both songwriter and interpreter.

My dad told me he first bought this album without knowing anything about it. He had only read the lyrics, as they used to be displayed on vinyl editions. This might be my favorite album of all time due to its pure sound and lyrics. I feel like Cat Stevens is a master of life and has everything to teach me when I'm listening to it, which is pretty frequent. I don't see how anyone could dislike this album. A gospel choir HAS to cover this WHOLE album at my funeral.

"une douceur typique hypie" indeed. This album feels very of-its-time to the point of feeling contrived. Still though I have respect for what it is, and the final (title) track is one of my favorite under 2:00 songs.

Your feedback for Tea For The Tillerman