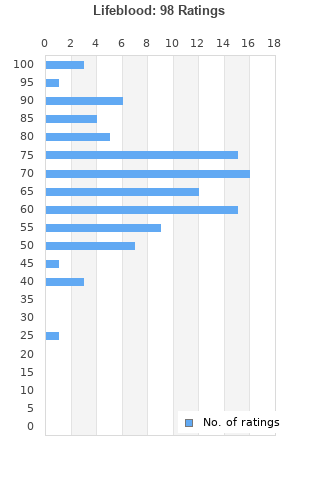 MANIC STREET PREACHERS*Lifeblood*2004*ORIGINAL*POSTER*AD*FRAMED* FAST WORLD SHIP
Condition: New
Time left: 1d 3h 17m 43s
Ships to: Worldwide
£64.95
Go to store
Product prices and availability are accurate as of the date indicated and are subject to change. Any price and availability information displayed on the linked website at the time of purchase will apply to the purchase of this product.  See full search results on eBay

Lifeblood is ranked 11th best out of 17 albums by Manic Street Preachers on BestEverAlbums.com.

The best album by Manic Street Preachers is The Holy Bible which is ranked number 411 in the list of all-time albums with a total rank score of 4,802. 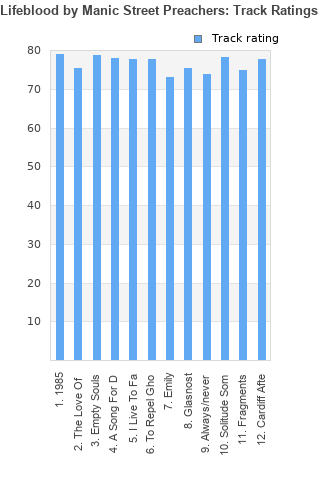 Rating metrics: Outliers can be removed when calculating a mean average to dampen the effects of ratings outside the normal distribution. This figure is provided as the trimmed mean. A high standard deviation can be legitimate, but can sometimes indicate 'gaming' is occurring. Consider a simplified example* of an item receiving ratings of 100, 50, & 0. The mean average rating would be 50. However, ratings of 55, 50 & 45 could also result in the same average. The second average might be more trusted because there is more consensus around a particular rating (a lower deviation).
(*In practice, some albums can have several thousand ratings)
This album has a Bayesian average rating of 69.0/100, a mean average of 68.1/100, and a trimmed mean (excluding outliers) of 68.6/100. The standard deviation for this album is 14.3.

A low key effort and more artistic than usual for them, just a lovely listen

it seems that this albums would have been made by an average coverband but not by the manics!

This album reminds me a lot of Killing Joke's "Outside The Gate", because both albums took a large change in pace, and ended up alienating the fanbase, leading to it being called "their worst album". In my opinion, this is not the Manic Street Preachers' worst album, but it's definitely not their best.

Very underrated this one. Probably because it's a different style for the Manics, less guitar and a smooth production. Ignore the mixed reviews and give it a listen, especially if you enjoyed This is My Truth.

'Solitude sometimes is' is one of the best songs they recorded last decade.

One of the most overlooked and under appreciated albums of all time. In many ways its a very un-Manic album, with no long guitar solos, complex lyrics or political slogans, but instead is an emotion filled work of synth beauty. Best tracks :- 1985, Solitude Sometimes Is & Glasnost

Your feedback for Lifeblood