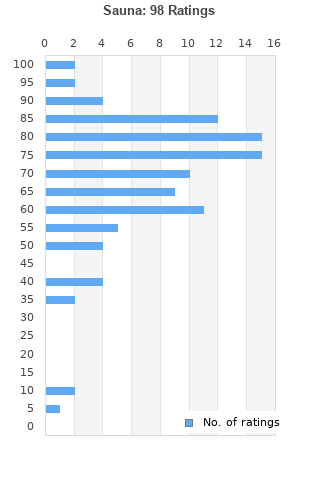 Sauna is ranked 4th best out of 22 albums by Mount Eerie on BestEverAlbums.com.

The best album by Mount Eerie is A Crow Looked At Me which is ranked number 573 in the list of all-time albums with a total rank score of 3,240. 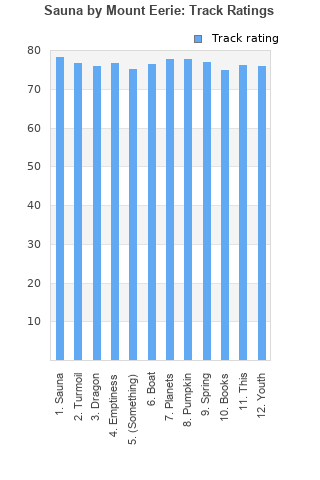 Rating metrics: Outliers can be removed when calculating a mean average to dampen the effects of ratings outside the normal distribution. This figure is provided as the trimmed mean. A high standard deviation can be legitimate, but can sometimes indicate 'gaming' is occurring. Consider a simplified example* of an item receiving ratings of 100, 50, & 0. The mean average rating would be 50. However, ratings of 55, 50 & 45 could also result in the same average. The second average might be more trusted because there is more consensus around a particular rating (a lower deviation).
(*In practice, some albums can have several thousand ratings)
This album has a Bayesian average rating of 71.4/100, a mean average of 69.3/100, and a trimmed mean (excluding outliers) of 71.2/100. The standard deviation for this album is 17.4.

Sauna feels more spacious, existentially darker & introspective than its three predecessors. Which - speaking of - makes this one feel like the final iteration of a series that began with Clear Moon (the lightest of the three) and continued on with Ocean Roar. Even though 2009's Wind's Poem unquestionably planted the seeds for what would follow. However, it feels separate to this series. I was also reminded why I liked the rock instrumentation on tracks like "Turmoil" & "Planets", they have kind of a Knock Knock-era Smog tinge to them.

First thoughts after just one track, are "odd and interesting".

Your feedback for Sauna