The Race For Space (studio album) by Public Service Broadcasting 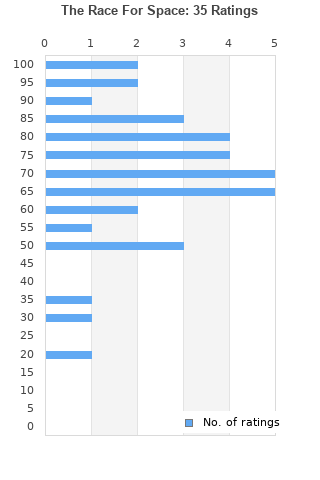 PUBLIC SERVICE BROADCASTING (UK) THE RACE FOR SPACE [REMIXES] NEW VINYL
Condition: New
Time left: 5d 5h 29m 11s
Ships to: Worldwide
$28.56
Go to store
Product prices and availability are accurate as of the date indicated and are subject to change. Any price and availability information displayed on the linked website at the time of purchase will apply to the purchase of this product.  See full search results on eBay

The Race For Space is ranked as the best album by Public Service Broadcasting. 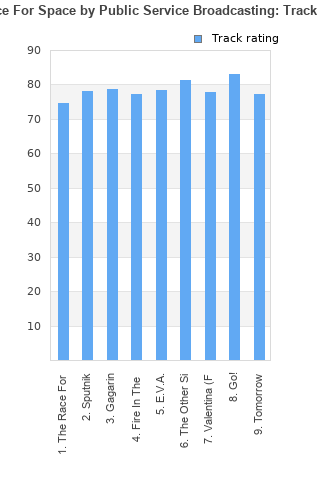 The Race For Space rankings

The Race For Space collection

The Race For Space ratings

Rating metrics: Outliers can be removed when calculating a mean average to dampen the effects of ratings outside the normal distribution. This figure is provided as the trimmed mean. A high standard deviation can be legitimate, but can sometimes indicate 'gaming' is occurring. Consider a simplified example* of an item receiving ratings of 100, 50, & 0. The mean average rating would be 50. However, ratings of 55, 50 & 45 could also result in the same average. The second average might be more trusted because there is more consensus around a particular rating (a lower deviation).
(*In practice, some albums can have several thousand ratings)
This album has a Bayesian average rating of 72.4/100, a mean average of 72.1/100, and a trimmed mean (excluding outliers) of 72.1/100. The standard deviation for this album is 18.1.

The Race For Space favourites

The Race For Space comments

This album is OK , if a tad too long . On first listening its super interesting stuff giving one a feeling of sitting in a NASA or Russian Space Control Hub , unfortunately it looses appeal on subsequent listens much like a book you've read before . Where as 'Every Valley' has excellent replay-ability

Houston We Have A Problem

This album is a life changing experience for me. When I listen to it in my car, I feel like I am a controller in a NASA mission control station. Am I crazy ? Maybe... But certainly a lover of this piece of art.

Favorite tracks: This a concept album. The Other Side is certainly a mastepiece track.

I love discovering new music especially when its something out of the blue and unexpected. This gem I found out via word of mouth. Easily would make my top three for 2015. As previously commented, this is music that is backdrop to actual radio, PSAs, etc. archive footage. Doesn't sound that great on paper but its really worth a listen. Unique and invites repeated listens. Impressed me enough to check out their other work which is just as worthy.

The first album was better, this is more "flat" in some way. In any case, very good work!

These guys create instrumentals by combining live performance with samples from old PSAs, propaganda films, and other archival footage. The samples on this album are pulled from British Film Institute footage on the Space Race. For those of us who grew up in the Space Shuttle era, where space travel was largely taken for granted, this album does a great job of capturing the anxiety and excitement of those early years.

Your feedback for The Race For Space