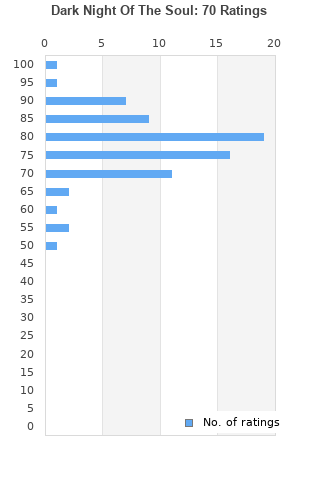 SPARKLEHORSE DARK NIGHT OF THE SOUL 2 CDS DREAMT FOR LIGHT YEARS IN THE BELLY
Condition: Good
Time left: 1d 17h 45m 31s
Ships to: Worldwide
£4.99
Go to store
Product prices and availability are accurate as of the date indicated and are subject to change. Any price and availability information displayed on the linked website at the time of purchase will apply to the purchase of this product.  See full search results on eBay

Listen to Dark Night Of The Soul on YouTube 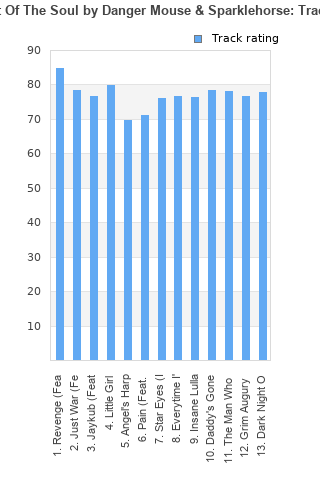 Dark Night Of The Soul rankings

Dark Night Of The Soul collection

Dark Night Of The Soul ratings

Rating metrics: Outliers can be removed when calculating a mean average to dampen the effects of ratings outside the normal distribution. This figure is provided as the trimmed mean. A high standard deviation can be legitimate, but can sometimes indicate 'gaming' is occurring. Consider a simplified example* of an item receiving ratings of 100, 50, & 0. The mean average rating would be 50. However, ratings of 55, 50 & 45 could also result in the same average. The second average might be more trusted because there is more consensus around a particular rating (a lower deviation).
(*In practice, some albums can have several thousand ratings)
This album is rated in the top 5% of all albums on BestEverAlbums.com. This album has a Bayesian average rating of 77.0/100, a mean average of 77.6/100, and a trimmed mean (excluding outliers) of 77.6/100. The standard deviation for this album is 8.7.

Dark Night Of The Soul favourites

Dark Night Of The Soul comments

The album isn't as dark as the title makes out, however there is much to laud here. There are no significant missteps, and many of the tracks hang together well, leading us on a journey through a varied selection of indie rock styles. The guesting overload doesn't affect the finished product, although it doesn't particularly enhance it either. Had Mark Linkous sang on the majority of the tracks, the overall feel wouldn't be so different. That said, Julian Casablancas, David Lynch and The Flaming Lips are all welcome additions. An interesting entry in the indie canon.

Revenge of the pseudonyms by Sparklemousedangerhorse featuring Frank Black Francis Thompson, Jiggy Popsterberg Jr and a few squares using their given names. Including contributions by artist who feature in 11 of my 100 Greatest Albums chart, the ingredients are all there for this to be the greatest thing ever and yet it's only my 4th favourite Sparklehorse album. Maybe it's a case of too many artistic collaborators dilute the overall artistic vision of the main creative talent, a slightly less well known but seemingly more appropriate idiom than too many cooks spoil the broth. Every song stands up fine on it's own (with the possible exception of Pain which feels to me like it's one of Linkous' slower songs sped up to fit Iggy's contribution) but the variety of different voices give the album the feel of a compilation. The distinctive voices of all the male singers bar David Lynch overpower the music to varying extents and when Daddy's Gone, the duet between Linkous and Nina Persson, comes along late in the day it makes me wish there was more of Mark's vocal input threading the album together. A valiant attempt well worth spending some time with which fails to transcend the sum of it's parts.

Sparklehorse meet Danger Mouse.
But it's more Linkous than the other. And there's a lot of friends to help him.
Some tracks are gorgeus, some other are terrible (Black Francis and Iggy Pop).
Sad and bautiful.

If the Black Francis and Iggy Pop Tunes were left off, this album would have been incredible. As it is it's still quite good.

Dark and lovely. "Revenge" is a favorite.

Your feedback for Dark Night Of The Soul