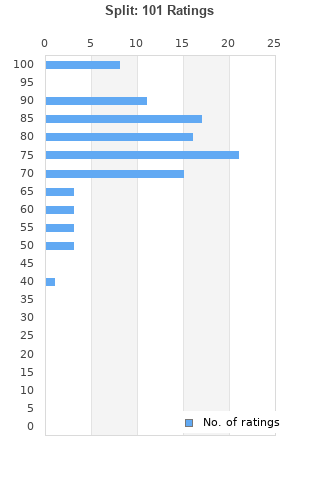 Sports / Plush Split VINYL LP NEW
Condition: New
Time left: 2d 8h 35m 42s
Ships to: Worldwide
$16.22
Go to store
Product prices and availability are accurate as of the date indicated and are subject to change. Any price and availability information displayed on the linked website at the time of purchase will apply to the purchase of this product.  See full search results on eBay

Split is ranked as the best album by Lush. 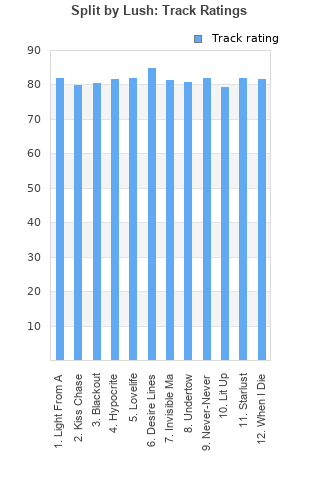 Rating metrics: Outliers can be removed when calculating a mean average to dampen the effects of ratings outside the normal distribution. This figure is provided as the trimmed mean. A high standard deviation can be legitimate, but can sometimes indicate 'gaming' is occurring. Consider a simplified example* of an item receiving ratings of 100, 50, & 0. The mean average rating would be 50. However, ratings of 55, 50 & 45 could also result in the same average. The second average might be more trusted because there is more consensus around a particular rating (a lower deviation).
(*In practice, some albums can have several thousand ratings)
This album is rated in the top 4% of all albums on BestEverAlbums.com. This album has a mean average rating of 78.0/100. The trimmed mean (excluding outliers) is 77.8/100. The standard deviation for this album is 12.2.

This band deserves more credit, as does this record. This album is beautiful and represents Lush's greatest effort.

While they had been produced by Cocteau Twins' Robin Guthrie for almost all their previous work, Lush teamed up with Mike Hedges on this record, and the result is clearer and tighter, and no less potent. Guitars (and vocals) keep building and building to wonderful effect.

The 'Split' in question was in fact not a pending demise of the group as some fans feared upon its release (and which did regrettably but understandably did occur after their follow-up record), but rather seems to be about the psychological effects on a young child when parents divorce, now the child grown up and looking back on her childhood and the things she could and couldn't understand. This seems most easily seen in "Light from a dead star" and "Kiss Chase", with more echoes throughout the remaining songs. Or perhaps that is just my take...

An improvement over Spooky. The songs on the second half are especially well done.

This is Lush's best release. The vocals here aren't as weak as they were on Spooky and the guitar melodies are much more captivating.

Your feedback for Split