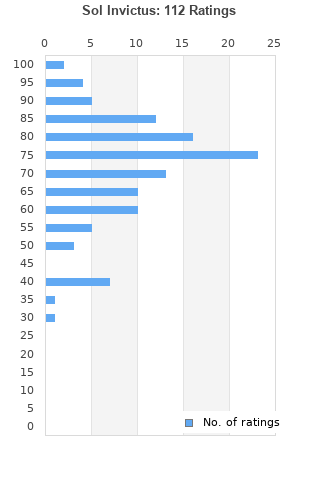 Faith No More LP Sol Invictus ltd edition gold vinyl New/Sealed
Condition: New
Time left: 17h 7m 47s
Ships to: Worldwide
$35.00
Go to store
Product prices and availability are accurate as of the date indicated and are subject to change. Any price and availability information displayed on the linked website at the time of purchase will apply to the purchase of this product.  See full search results on eBay

Sol Invictus is ranked 5th best out of 11 albums by Faith No More on BestEverAlbums.com.

The best album by Faith No More is Angel Dust which is ranked number 520 in the list of all-time albums with a total rank score of 3,707.

Tickets from Ticketmaster Get tickets
May
22
Sat
15:00 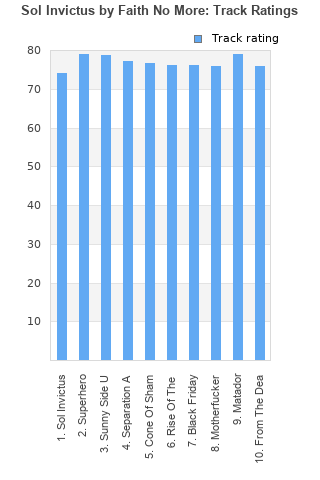 Rating metrics: Outliers can be removed when calculating a mean average to dampen the effects of ratings outside the normal distribution. This figure is provided as the trimmed mean. A high standard deviation can be legitimate, but can sometimes indicate 'gaming' is occurring. Consider a simplified example* of an item receiving ratings of 100, 50, & 0. The mean average rating would be 50. However, ratings of 55, 50 & 45 could also result in the same average. The second average might be more trusted because there is more consensus around a particular rating (a lower deviation).
(*In practice, some albums can have several thousand ratings)
This album has a Bayesian average rating of 71.7/100, a mean average of 71.6/100, and a trimmed mean (excluding outliers) of 71.6/100. The standard deviation for this album is 14.3.

FNM are my favourite all time band. I was very apprehensive about them making another album. What if it sucked!! But this is an amazing 'comeback' album. Their best since Angel dust. Should be ranked #2 IMO.

The album sounds like a weaker version of Album Of The Year, but holds no re-listen value like AOTY did. The first and the last track are the only ones that are slightly memorable.

This was a massive disappointment to me. After 18 years I expected something better than this. It's not even as good as, king for a day. A real let down.

This is every bit as weird and wonderful as their earlier works. It's like they never went away.

It may not be as good as Angel Dust, King For A Day, and The Real Thing, but it is still another great addition to the Faith No More CD collection, and FNM returns strong. Best track is Superhero.

Simply amazing. Their best since Angel Dust and you could argue that Angel Dust is the only album of theirs that is better. The Real Thing is pretty good too so I would rank it third but this is worthy of being alongside those classics.

Instant classic. Probably their best since Angel Dust! Dark and hilarious at same time. Beautiful and disturbing. In other words Faith No More!

Your feedback for Sol Invictus