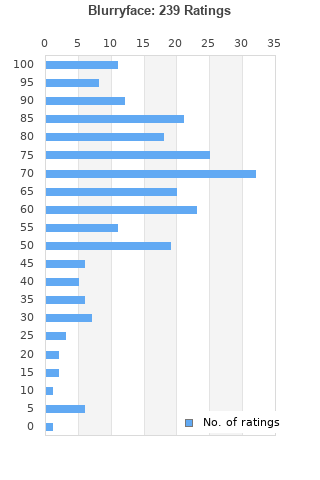 Twenty One Pilots-Blurryface CD NEW
Condition: Brand New
Time left: 9h 51m 53s
Ships to: Worldwide
$40.62
Go to store
Product prices and availability are accurate as of the date indicated and are subject to change. Any price and availability information displayed on the linked website at the time of purchase will apply to the purchase of this product.  See full search results on eBay

Blurryface is ranked 3rd best out of 5 albums by Twenty One Pilots on BestEverAlbums.com.

The best album by Twenty One Pilots is Vessel which is ranked number 1036 in the list of all-time albums with a total rank score of 1,801. 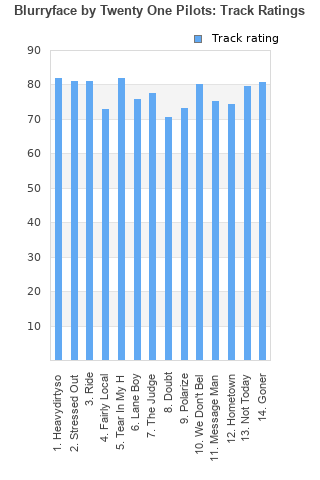 Rating metrics: Outliers can be removed when calculating a mean average to dampen the effects of ratings outside the normal distribution. This figure is provided as the trimmed mean. A high standard deviation can be legitimate, but can sometimes indicate 'gaming' is occurring. Consider a simplified example* of an item receiving ratings of 100, 50, & 0. The mean average rating would be 50. However, ratings of 55, 50 & 45 could also result in the same average. The second average might be more trusted because there is more consensus around a particular rating (a lower deviation).
(*In practice, some albums can have several thousand ratings)
This album has a Bayesian average rating of 65.1/100, a mean average of 64.7/100, and a trimmed mean (excluding outliers) of 64.7/100. The standard deviation for this album is 22.7.

If you turned on the radio at all at the time this came out, you would undeniably hear Stressed Out or Ride. There was an oversaturation of Twenty One Pilots for a good 3 years or so. So now feels like the right time to check this out, after all the hype has died down a bit. Blurryface does help to expand the musical ethos of this band and they improve their songwriting abilities, but the lyricist seems to have lost his touch a bit. Rather than being emotionally vulnerable in a great way like on Vessel, everything comes off as whiny on Blurryface. In comparison to Vessel, the peaks are definitely higher on this effort, but the valleys are way lower. Overall, this record does less good than it hopes to do. Not to mention it's twice as long as it needs to be.

Well, this album hasn't changed me in the slightest, I will forget it within minutes and will have no desire to listen to it ever again, real shame, their old stuff is alright. Which I guess it's better than just being beyond awful, but either way I don't care for it.

A not very interesting but still listenable album.

When they released Fairly Local as the first single, I think that set the tone that this was gonna be nothing special, and certainly nowhere near Vessel. There's a couple standout songs (Heavydirtysoul, Stressed Out, Tear In My Heart, all surprisingly VERY good in my opinion), but most of the album feels uninspired, which is real sad cause these guys were unique.

Was an avid listener of this band before they hit mainstream success, as their newest album Blurryface is a huge disappointment. Barely anything that special other than the band failing to follow some kind of "Blurryface" theme/character. Only a big fan of their self-titled, honestly.

Twenty one pilots are really still trying to figure out who they are. They cover so many genres that the album completely lacks a cohesive sound. The common motif is depression and that is what ties each song together, but there is little commonalities in the music of Blurryface. It is filled with good songs but without a common focus, it is tough to listen to from start to finish.

Their music is white-washed and stale, but it's passably decent for a mainstream audience. But honestly, Twenty One Pilots is bad

This is what pop albums should be doing more often. Every track is strong, related and smooth in their transitions from song to song. When it needs to soar, it soars. When it ends, it leaves on a somber note. It's pop done right in the modern day, and a sign that hopefully others will try and emulate and make the standard.

Key Cuts: Stressed Out, We Don't Believe What's on TV, Not Today

Not as good as Vessel in my opinion. However, Twenty One Pilots is what pop music needs to become: more experimental and less bland and sterile.

Some good songs on this album - though nothing is quite what I'd call amazing. Lacks stability.

Your feedback for Blurryface