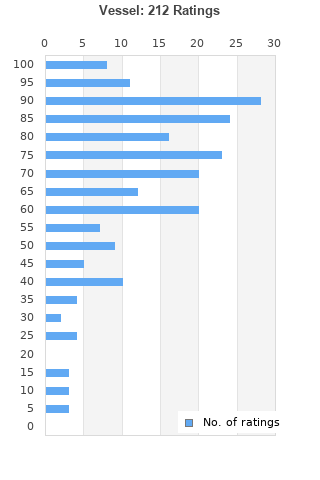 Vessel is ranked as the best album by Twenty One Pilots. 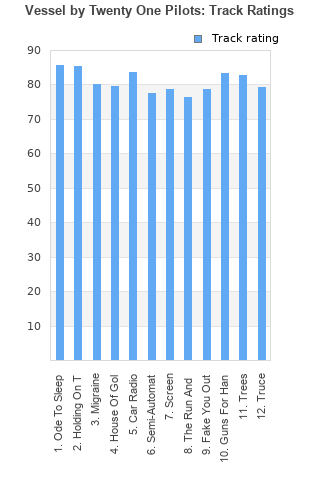 Rating metrics: Outliers can be removed when calculating a mean average to dampen the effects of ratings outside the normal distribution. This figure is provided as the trimmed mean. A high standard deviation can be legitimate, but can sometimes indicate 'gaming' is occurring. Consider a simplified example* of an item receiving ratings of 100, 50, & 0. The mean average rating would be 50. However, ratings of 55, 50 & 45 could also result in the same average. The second average might be more trusted because there is more consensus around a particular rating (a lower deviation).
(*In practice, some albums can have several thousand ratings)
This album has a Bayesian average rating of 69.4/100, a mean average of 69.2/100, and a trimmed mean (excluding outliers) of 69.2/100. The standard deviation for this album is 22.3.

I have a friend who has been incessantly recommending this band to me for years, since this came out actually. And now I have finally caved. There's some interesting ideas in their songs, but they're all structured identically, bordering on being generic pop. Vessel starts off strong with the one-two punch of Ode to Sleep followed by Holding on to You, but immediately tapers off in quality with Migraine. Not only do most of the songs sound the same, most of the performances are less than inspired. There's an occasional great moment from the drummer (Guns for Hands) and a substantially rarer great moment from the vocalist. The rapping reminds me of my least favorite rapper ever, Eminem. Not just because he's white, the way he enunciates and also the way the lyrics are written.
I will say the lyrics are very emotionally vulnerable and for the most part very well written. I also don't understand why there's yelling every once in a while. It's never, ever, ever warranted. Never. They're not in any way Black Flag, they're more akin to Taylor Swift. The mixing and producing are nothing special, at least it never sounds awful. Overall though, I don't think this album is as bad as some people say, and it's not as good as some people say. It's right in the middle at pretty alright.

Seriously insufferable. This is music for boring people - for faux-indie people. Edgy music for the distinctly-plain masses. Tyler's whining and generic ukulele playing on House of Gold is one of the worst musical moments of the decade.

The lyrics are great on every track.

Fun/light music. It's pretty decent for pop, but being good by the low bar set by pop does not make it objectively great.

Twenty one pilots showed their potential with Vessel by writing a couple fantastic songs (Car Radio, Holding onto You, Ode to Sleep, Guns for Hands), but unfortunately the majority of this album is really forgettable.

Starts out strong as a good string of radio-friendly pop/alternative songs but after House of Gold starts to act confused as to what it wants to be. A few of the songs on the album are really good, though, and a good precursor to what's to come from the group.

Key Cuts: Ode to Sleep, Holding on to You, House of Gold

This is one of top five albums of all time. The music is fantastic by both Tyler Joseph and Josh Dun. But I love Tyler's lyrics in this album. He talks about depression and suicide in most of his songs but he'll also sing about love and passion for another too. I know TOP has blown onto the music scene today and are one of the biggest bands today but , they are not like pop artists because pop artists don't sing about depressing, sad topics and they have songs that sound all the same. TOP on the other hand doesn't do that. They're a mix of so many genres they shouldn't even be classified as 'pop artists'. Lastly, Blurryface was ruined for me bc of how overplayed most of the songs got, this album still has its intensity after each listen and i find something new about this one with each listen. Every listener will have at least one song they will like on this album so please give it a listen.

Still their best yet.

I'm upset they removed "slowtown" from "regional at best" in remaking it to become "vessel" but the album is still high quality. good work from an upcoming band

Your feedback for Vessel