No Need To Argue (studio album) by The Cranberries 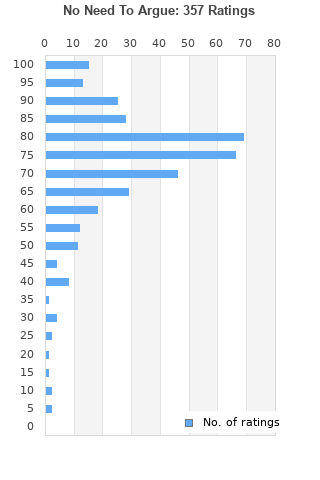 No Need To Argue is ranked as the best album by The Cranberries. 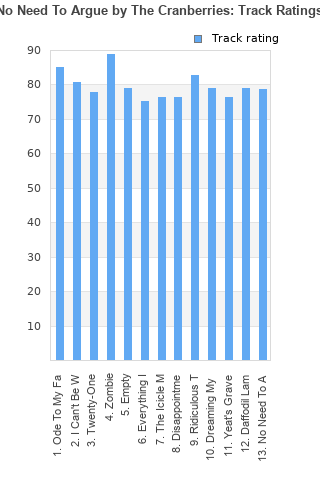 No Need To Argue rankings

No Need To Argue collection

No Need To Argue ratings

Rating metrics: Outliers can be removed when calculating a mean average to dampen the effects of ratings outside the normal distribution. This figure is provided as the trimmed mean. A high standard deviation can be legitimate, but can sometimes indicate 'gaming' is occurring. Consider a simplified example* of an item receiving ratings of 100, 50, & 0. The mean average rating would be 50. However, ratings of 55, 50 & 45 could also result in the same average. The second average might be more trusted because there is more consensus around a particular rating (a lower deviation).
(*In practice, some albums can have several thousand ratings)
This album is rated in the top 24% of all albums on BestEverAlbums.com. This album has a Bayesian average rating of 74.6/100, a mean average of 73.4/100, and a trimmed mean (excluding outliers) of 74.6/100. The standard deviation for this album is 16.1.

No Need To Argue favourites

No Need To Argue comments

I think this album is ok. I just really can’t stand her voice

Helped me a lot after an awful heartbreak. Felt as if Dolores was singing exactly about my own life.

When I was like 14, I listened to this for like 2 months constantly. I think this higher rating has more to do with that nostalgia. The music itself is actually pretty average minus a few tracks.

Pretty solid album. They put on a great live show!

Zombie, while a cracking song, gets tiring after awhile. I enjoy the rest of the album.

A great album. The sound is a little more energetic and confident than Everybody Else is Doing It but it still has that haunting beauty. Tons of great songs. I should replace my copy of this album, it skips really bad on Yeat's Grave.

Your feedback for No Need To Argue