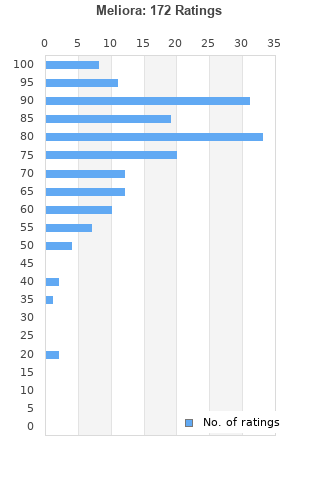 Meliora is ranked as the best album by Ghost (SE). 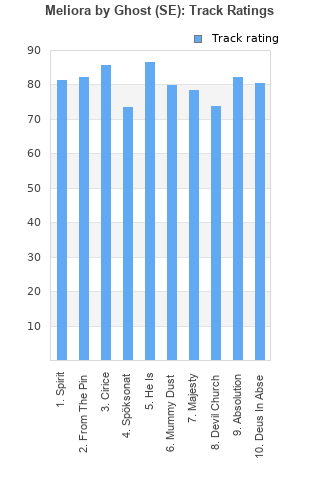 Outliers can be removed when calculating a mean average to dampen the effects of ratings outside the normal distribution. This figure is provided as the trimmed mean. A high standard deviation can be legitimate, but can sometimes indicate 'gaming' is occurring. Consider a simplified example* of an item receiving ratings of 100, 50, & 0. The mean average rating would be 50. However, ratings of 55, 50 & 45 could also result in the same average. The second average might be more trusted because there is more consensus around a particular rating (a lower deviation).
(*In practice, some albums can have several thousand ratings)
This album is rated in the top 3% of albums on BestEverAlbums.com. This album has a mean average rating of 78.0/100. The trimmed mean (excluding outliers) is 79.0/100. The standard deviation for this album is 14.1.

Meliora is a sort of kitsch satanic church choir of an album. It certainly has its strong points in the spiritual parody "He is" and the greedy "Mummy Dust". However as the album goes on you begin to know where its going both musically and lyrically. Ultimately, It doesn't overwhelm you with its demonic majesty but you still respect its effort.

More like 1970's ban Boston than a metal band

One of the more memorable new metal bands...

A friend tried a couple of times to get me into Ghost. It didn't work for me. Then I listened to this album. Wow, it is so melodic and accessible. No fillers either.

I recently got turned on to Ghost; looking forward to see them on tour this summer w/ Iron Maiden.

Favoritas: Cirice, He Is

I haven't been this entranced by an album in a long time.

im not into to metal, but even I have to say this deserves to be on the top 20 of the year. Amazing listen!

Almost as good as Opus Eponymous. It probably won't chart really high, given the usual indie/hipster taste of the users in this site, but it's indeed one of the 2015's best in metal.

Your feedback for Meliora