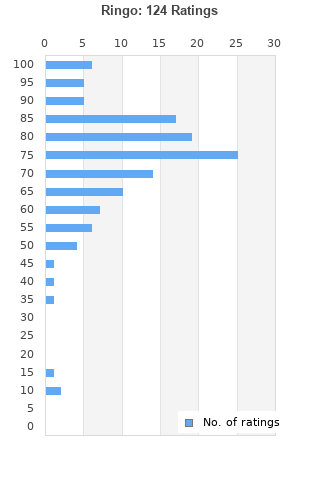 Ringo Starr ONLY YOU US Apple 45 single with picture label & sleeve #1876
Condition: Used
Time left: 28m 42s
Ships to: Worldwide
$12.99
Go to store
Product prices and availability are accurate as of the date indicated and are subject to change. Any price and availability information displayed on the linked website at the time of purchase will apply to the purchase of this product.  See full search results on eBay

Ringo is ranked as the best album by Ringo Starr. 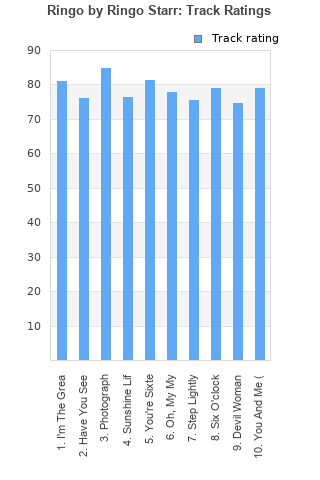 Rating metrics: Outliers can be removed when calculating a mean average to dampen the effects of ratings outside the normal distribution. This figure is provided as the trimmed mean. A high standard deviation can be legitimate, but can sometimes indicate 'gaming' is occurring. Consider a simplified example* of an item receiving ratings of 100, 50, & 0. The mean average rating would be 50. However, ratings of 55, 50 & 45 could also result in the same average. The second average might be more trusted because there is more consensus around a particular rating (a lower deviation).
(*In practice, some albums can have several thousand ratings)
This album is rated in the top 11% of all albums on BestEverAlbums.com. This album has a Bayesian average rating of 75.6/100, a mean average of 74.6/100, and a trimmed mean (excluding outliers) of 75.8/100. The standard deviation for this album is 15.0.

What an absolute joy it was to finally here this album which could well be the most underrated historically significant rock album of the 70’s. Simply look at the roll call of guests who contributed a veritable who’s who of rock stardom in the early 70’s

It’s important because its the first and only time all 4 Beatles would appear on the 1 album even if it isn’t on the one track or tracks. One can speculate what The Beatles MAY have sounded like post 1970 if still together

It’s also important because it sold like crazy making Ringo a star in his own right reaching number 1 in Canada , Spain and Sweden , number 2 in US and Australia and top 10 around the globe. Further, single release a cover of “Your Sixteen” would hit number 1 on the US Charts and be a global smash. Who knew ?

And finally, it’s actually good , really good chock full of great tunes and harmonies all performed with tongue firmly planted in cheek with the highlights including “I’m The Greatest” , single “Photograph” (check out the video on YouTube), “You And Me (Babe) and the CD additional track which should have Ben on the album proper “It Don’t Come Easy”

A delightful record by one of the gluest guys in the Rock history. Photograph is a nostalgic masterpiece and this album is the closest reunion you'll ever get from the Fab Four.

By far the best album ever released by Ringo Starr. He of course gets a little help from his friends on this album. The other ex Beatles all contributing. Would recommend this one to all Beatles fans. If you want just one Ringo album, this is the one. Hugely enjoyable.

A great lp that has stood up through the years.

Great album by the one and only Ringo Starr!!!

Your feedback for Ringo