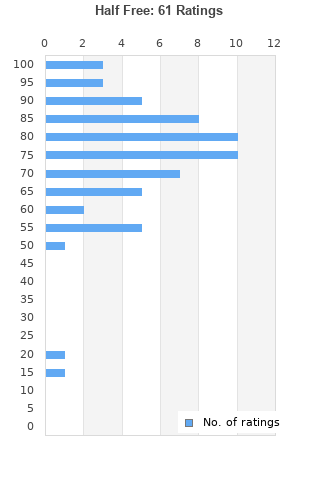 U.S. Girls - Half Free [VINYL LP]
Condition: New
Time left: 9d 23h 44m 56s
Ships to: Worldwide
£19.62
Go to store
Product prices and availability are accurate as of the date indicated and are subject to change. Any price and availability information displayed on the linked website at the time of purchase will apply to the purchase of this product.  See full search results on eBay

Half Free is ranked 2nd best out of 6 albums by U.S. Girls on BestEverAlbums.com.

The best album by U.S. Girls is In A Poem Unlimited which is ranked number 2660 in the list of all-time albums with a total rank score of 571. 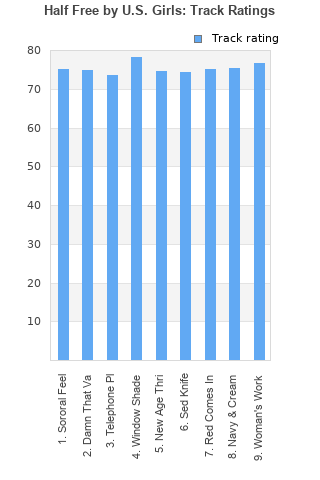 Rating metrics: Outliers can be removed when calculating a mean average to dampen the effects of ratings outside the normal distribution. This figure is provided as the trimmed mean. A high standard deviation can be legitimate, but can sometimes indicate 'gaming' is occurring. Consider a simplified example* of an item receiving ratings of 100, 50, & 0. The mean average rating would be 50. However, ratings of 55, 50 & 45 could also result in the same average. The second average might be more trusted because there is more consensus around a particular rating (a lower deviation).
(*In practice, some albums can have several thousand ratings)
This album is rated in the top 6% of all albums on BestEverAlbums.com. This album has a Bayesian average rating of 76.6/100, a mean average of 75.1/100, and a trimmed mean (excluding outliers) of 77.2/100. The standard deviation for this album is 16.2.

If I had to summarize it in the most crass reductionist terms possible, I might describe it as Broadcast meets David Lynch meets Cyndi Lauper. But I'm not going to do that because this album just surprises me with something new and unexpected at every turn.

"Oh cool, a cute upbeat surf-rock song whoa this guitar tone is filthy and I'm drowning in distortion! Now this beat keeps skipping and I'm creeped out, but the bassline is so catchy... what the hell is that moaning in the background? Oh, a little intermission with two girls joking on the phone... about some fairly heavy Oedipal stuff and it just ended with creepy echoey 50s sitcom laughter. Okay hang on, since when was this a synthpop album, and how does this seem to fit the overall aesthetic so perfectly?"

Nothing about this album fits neatly in any time period. It's like I'm listening to music from an alternate timeline after America suffered a natural disaster in the 50s and is now mostly covered in desert, but there's a quirky little town centered around a desalination plant that simultaneously functions as a saloon, and the punk movement was spearheaded by people that only listened to surf rock and boogie-woogie piano music, and people have to go out shooting muskrats for dinner, and everyone builds their own electronics and people drive around on rickety little scooters painted with bright colours, and the bubblegum and lipstick industries are still inexplicably booming. There's also probably a lot of sex trafficking. It's a dark timeline.

these aren't the kind of pop songs that are gonna let you off easy.

Your feedback for Half Free