In A Poem Unlimited (album) by U.S. Girls 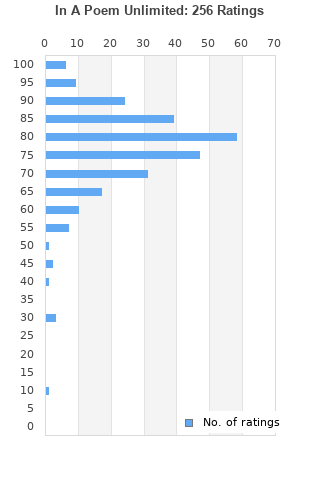 In A Poem Unlimited is ranked as the best album by U.S. Girls. 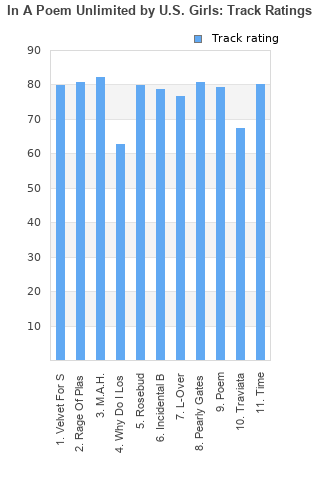 In A Poem Unlimited rankings

In A Poem Unlimited collection

In A Poem Unlimited ratings

Outliers can be removed when calculating a mean average to dampen the effects of ratings outside the normal distribution. This figure is provided as the trimmed mean. A high standard deviation can be legitimate, but can sometimes indicate 'gaming' is occurring. Consider a simplified example* of an item receiving ratings of 100, 50, & 0. The mean average rating would be 50. However, ratings of 55, 50 & 45 could also result in the same average. The second average might be more trusted because there is more consensus around a particular rating (a lower deviation).
(*In practice, some albums can have several thousand ratings)
This album is rated in the top 6% of albums on BestEverAlbums.com. This album has a mean average rating of 76.0/100. The trimmed mean (excluding outliers) is 76.7/100. The standard deviation for this album is 12.4.

In A Poem Unlimited favourites

In A Poem Unlimited comments

Sounding like something of a cross between Kylie Minogue and St. Vincent, U.S. Girls returns for her sixth studio album with renewed vigour and political fire. With a lot to say on ingrained political chauvinism, she articulates her message in a number of styles – fifties pop, disco, glam rock – while never losing the thread.

In a Poem Unlimited is a project presented as something diferent and unique. And It is at some parts, in others is just repetitive and boring, with a lot passion there, but poor execution, especially in the production part.

Really enjoyed this, very lush sound and vocals are beautiful. Pearly Gates struck me as my favourite track.

Stunning. Art-pop at its best AND most dance-able. Yes her voice sounds a lot like Kylie Minogue, which is initially mildly disconcerting, but once you get past that there are so many rewards here. Every song is killer, but special mentions to M.A.H. (once you figure out it's about Obama it truly aches) and Time (which sounds like a lost cut from Talking Heads' Remain in Light).

This album was much better than I anticipated.

Fav Track: Pearly Gates (because it sounds like Regulate)

Just a really solid, groovy, unique album. I’ve been putting it on repeat all afternoon and it’s still not getting old to me (though maybe for my family). The lyrics are poignant and topical for this time of reckoning with sexual abuse, among other things, but they’re of equal importance to the music, give or take.
Favorites: Mad As Hell, Poem, Velvet 4 Sale. Mad As Hell is instantly memorable.

This should be one of my favorite albums of the year. objectively speaking almost every song is great and distinct. Maybe it's just missing some of the rawness of her previous album, but despite my inability to click with it, In A Poem Unlimited is still one of the better projects of the year.

unexpectedly good art-disco album. her voice kinda reminds me of Kylie Minogue. of course the music and lyrics and all are much better than Kylie's. can't find a single weak track. i even dig "why do i lose my voice...?" best tracks: "m.a.h.", "rosebud" and "pearly gates"

Your feedback for In A Poem Unlimited