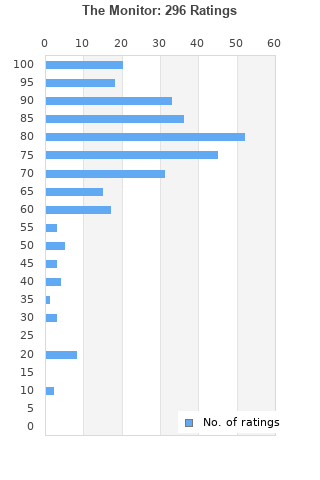 The Monitor by Titus Andronicus (CD, Mar-2010, XL)
Condition: Very Good
Time left: 3d 16h 6m 22s
Ships to: Worldwide
$4.00
Go to store
Product prices and availability are accurate as of the date indicated and are subject to change. Any price and availability information displayed on the linked website at the time of purchase will apply to the purchase of this product.  See full search results on eBay

The Monitor is ranked as the best album by Titus Andronicus. 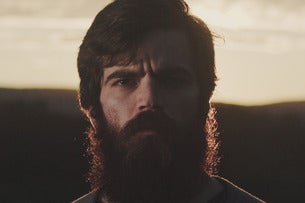 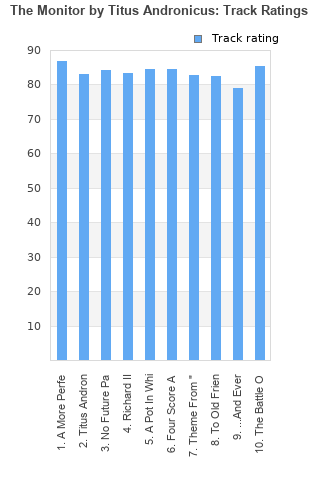 Rating metrics: Outliers can be removed when calculating a mean average to dampen the effects of ratings outside the normal distribution. This figure is provided as the trimmed mean. A high standard deviation can be legitimate, but can sometimes indicate 'gaming' is occurring. Consider a simplified example* of an item receiving ratings of 100, 50, & 0. The mean average rating would be 50. However, ratings of 55, 50 & 45 could also result in the same average. The second average might be more trusted because there is more consensus around a particular rating (a lower deviation).
(*In practice, some albums can have several thousand ratings)
This album is rated in the top 4% of all albums on BestEverAlbums.com. This album has a Bayesian average rating of 77.7/100, a mean average of 75.8/100, and a trimmed mean (excluding outliers) of 77.9/100. The standard deviation for this album is 17.9.

Revisiting this years later, I don't know what I was thinking, because this is a goddamned masterpiece. Who knew Civil War reenactment could slap this hard?

Epic first half with some of the best tunes of "folk punk" ever made since Against Me! debut album. The album loses some of its power in the second half that turns too long but still a remarkable record overall. Should be ranked higher.

you know it's a real punk band when they've got a hundred songs with "no future" in the title. think they like the sex pistols a little bit?

fun fact: I got their enormous "the most lamentable tragedy" to fit in a standard Vinyl Styl brand protective record sleeve! half an inch is hanging out the poor stretched thing but w/e.

Best album by Titus Andronicus so far. An instant classic.

After five listens, this officially isn't my cup of tea. But after every listen it sounds as fresh as the first time. Also this is really enjoyable to listen on a road with clouds above

How many albums did you write "wow" on? I got emails for 5. Very insightful.

This is one of those albums which at first listen seems like nothing much, but on repeated listens grows better and better.

Patrick Stickles merges reality with fantasy in this album. The Civil War serves as a backdrop for something larger. The Monitor is constantly referencing "the enemy" as the Confederates of the Civil War, as well as the conformists of modern society. Listen to this album hard. Move all distractions out of the way. This album is instantly relatable and it is very intense.

Your feedback for The Monitor