The best album credited to Lorde is Melodrama which is ranked number 344 in the overall greatest album chart with a total rank score of 5,806.

Lorde is ranked number 238 in the overall artist rankings with a total rank score of 8,932.

LORD HIGH FIXERS - Once Upon A Time Called Right Now - CD - Ep - **SEALED/ NEW**
Condition: Brand New
Time left: 10m 40s
Ships to: Worldwide
$21.75
Go to store
Product prices and availability are accurate as of the date indicated and are subject to change. Any price and availability information displayed on the linked website at the time of purchase will apply to the purchase of this product.  See full search results on eBay

The following albums by Lorde are ranked highest in the greatest album charts:

This may not be a complete discography for Lorde.This listing only shows those albums by this artist that appear in at least one chart on this site. If an album is 'missing' that you think deserves to be here, you can include it in your own chart from the My Charts page!

0
(from the album The Love Club EP)
Show more
N.B. Tracks must have received at least 3 ratings to appear in the above list. 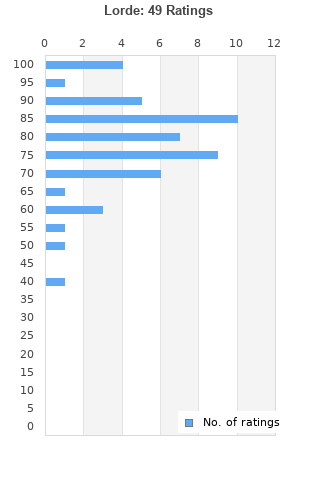 Rating metrics: Outliers can be removed when calculating a mean average to dampen the effects of ratings outside the normal distribution. This figure is provided as the trimmed mean. A high standard deviation can be legitimate, but can sometimes indicate 'gaming' is occurring. Consider a simplified example* of an item receiving ratings of 100, 50, & 0. The mean average rating would be 50. However, ratings of 55, 50 & 45 could also result in the same average. The second average might be more trusted because there is more consensus around a particular rating (a lower deviation).
(*In practice, some artists can have several thousand ratings)
This artist is rated in the top 7% of all artists on BestEverAlbums.com. This artist has a Bayesian average rating of 77.7/100, a mean average of 78.3/100, and a trimmed mean (excluding outliers) of 78.3/100. The standard deviation for this artist is 12.9.

This girl is definitely going places. Perfect places, if you will.

Calling it now: in a few years, she's gonna reinvent herself and release an album that sounds like nothing else and goes on to be seen as one of the best albums of the generation.

Definitely one to watch.

Good songs and a unique style. Her first album is great, one of my favorites. The last one (Melodrama) is decent.

She truly is fantastic for a mainstream act. Probably the only pop star of the 21st century that I actually like. She's an old soul, the new Janis Joplin perhaps.

It's pop music, friend. Nothing more and nothing less.

Stripped down Art-Pop with Blues chord progressions, Jazzy Mixolydian keys, and topped off with a rich, deep voice that's about 10 years beyond her age. Mainstream success was an ironic fate for someone who fought mainstream so hard with her poignant lyrics. (Not sure if she actually writes them, they're credited to her and her producer, and that's normally a sign she doesn't).

Your feedback for Lorde