The latest album released by The Raconteurs is Live At Electric Lady. This album was released 05/29/2020.

The best album credited to The Raconteurs is Consolers Of The Lonely which is ranked number 1,201 in the overall greatest album chart with a total rank score of 1,521.

The Raconteurs is ranked number 617 in the overall artist rankings with a total rank score of 2,872.

The Raconteurs - Interview Cassette - 45 minutes - 2006 - UNIQUE ITEM
Condition: Very Good
Time left: 57m 20s
Ships to: Worldwide
£5.00
Go to store
Product prices and availability are accurate as of the date indicated and are subject to change. Any price and availability information displayed on the linked website at the time of purchase will apply to the purchase of this product.  See full search results on eBay

The following albums by The Raconteurs are ranked highest in the greatest album charts:

1.
Consolers Of The Lonely

This may not be a complete discography for The Raconteurs.This listing only shows those albums by this artist that appear in at least one chart on this site. If an album is 'missing' that you think deserves to be here, you can include it in your own chart from the My Charts page!

0
(from the album Consolers Of The Lonely)
3.
Carolina Drama
Rating: 86 (54 votes)Comments:

2
(from the album Consolers Of The Lonely)
5.
Salute Your Solution
Rating: 85 (59 votes)Comments:

1
(from the album Consolers Of The Lonely)
6.
You Don't Understand Me
Rating: 85 (50 votes)Comments:

0
(from the album Consolers Of The Lonely)
7.
Broken Boy Soldier
Rating: 84 (50 votes)Comments:

2
(from the album Consolers Of The Lonely)
10.
These Stones Will Shout
Rating: 83 (43 votes)Comments:

0
(from the album Consolers Of The Lonely)
Show more 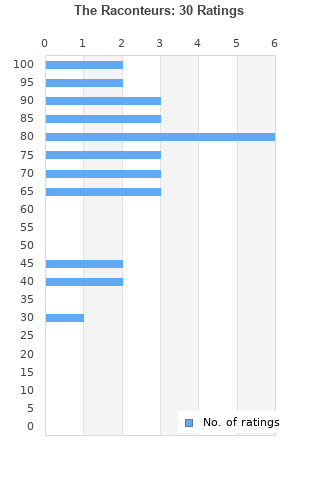 Rating metrics: Outliers can be removed when calculating a mean average to dampen the effects of ratings outside the normal distribution. This figure is provided as the trimmed mean. A high standard deviation can be legitimate, but can sometimes indicate 'gaming' is occurring. Consider a simplified example* of an item receiving ratings of 100, 50, & 0. The mean average rating would be 50. However, ratings of 55, 50 & 45 could also result in the same average. The second average might be more trusted because there is more consensus around a particular rating (a lower deviation).
(*In practice, some artists can have several thousand ratings)
This artist has a Bayesian average rating of 74.1/100, a mean average of 73.8/100, and a trimmed mean (excluding outliers) of 73.8/100. The standard deviation for this artist is 18.1.

I guess you have to like The White Stripes better (being that they are just epic) but this band is an excellent outfit. Brendan Benson is a stellar partner for JW, and his work here makes me want to check out his solo stuff. Both Racs' albums are so good.

I still think that Consolers of the Lonely is one of the best albums out there. I don't care what you think.

Your feedback for The Raconteurs