The best album credited to Royal Blood is Royal Blood which is ranked number 926 in the overall greatest album chart with a total rank score of 1,986.

Royal Blood is ranked number 676 in the overall artist rankings with a total rank score of 2,653.

The following albums by Royal Blood are ranked highest in the greatest album charts:

This may not be a complete discography for Royal Blood.This listing only shows those albums by this artist that appear in at least one chart on this site. If an album is 'missing' that you think deserves to be here, you can include it in your own chart from the My Charts page!

0
(from the album How Did We Get So Dark?)
Show more
N.B. Tracks must have received at least 3 ratings to appear in the above list. 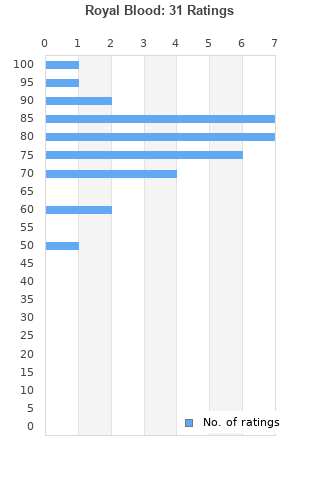 Rating metrics: Outliers can be removed when calculating a mean average to dampen the effects of ratings outside the normal distribution. This figure is provided as the trimmed mean. A high standard deviation can be legitimate, but can sometimes indicate 'gaming' is occurring. Consider a simplified example* of an item receiving ratings of 100, 50, & 0. The mean average rating would be 50. However, ratings of 55, 50 & 45 could also result in the same average. The second average might be more trusted because there is more consensus around a particular rating (a lower deviation).
(*In practice, some artists can have several thousand ratings)
This artist is rated in the top 9% of all artists on BestEverAlbums.com. This artist has a Bayesian average rating of 77.5/100, a mean average of 78.3/100, and a trimmed mean (excluding outliers) of 78.3/100. The standard deviation for this artist is 10.3.

Awesome riffs and an amazing sound from just two blokes, a bass and a drum kit!

The best modern mainstream rock band. Lights Out doesn't sound that good tho, hope the new album is better than the single. So much potential...

They are not the Black Keys, but these guys have real talent. And don't ask me how the make those awesome songs using only drums and bass guitar...


@TwelfthGuy - It's actually bass riffs, they don't use a guitar..

Anyway, great new band - huge potential and a brilliant sound. Can't wait for a follow up.

Saw these guys live opening for the Foo Fighters, and they won over everyone in the amphitheater who hadn't heard them before. A lot of potential and a very solid first record. Interested to see where they go from here.

Curious to see if they can branch out from their sound. It's a little too much like their influences. I'd agree they have potential, but...

These guys make kickass music. They definitely have a bright future.

So, so much potential.

Royal Bloods's debut album was by far one of my favorite albums for 2014. Killer guitar riffs coupled with catchy lyrics and brilliant drumming makes for a brilliant album.

Your feedback for Royal Blood