How Did We Get So Dark? (studio album) by Royal Blood 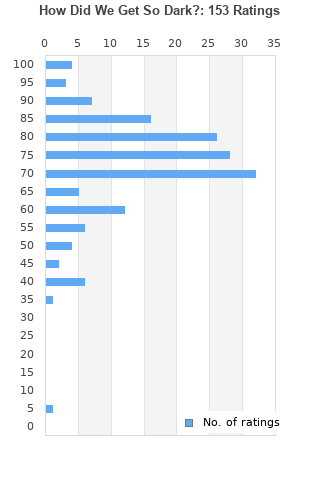 MIRROR CASSETTE----> ROYAL BLOOD How Did We Get So Dark? SILVER Chrome TAPE 0629
Condition: Like New
Time left: 2d 4h 33m
Ships to: Worldwide
$99.99
Go to store
Product prices and availability are accurate as of the date indicated and are subject to change. Any price and availability information displayed on the linked website at the time of purchase will apply to the purchase of this product.  See full search results on eBay

How Did We Get So Dark? is ranked 2nd best out of 3 albums by Royal Blood on BestEverAlbums.com.

The best album by Royal Blood is Royal Blood which is ranked number 969 in the list of all-time albums with a total rank score of 1,948.

Listen to How Did We Get So Dark? on YouTube 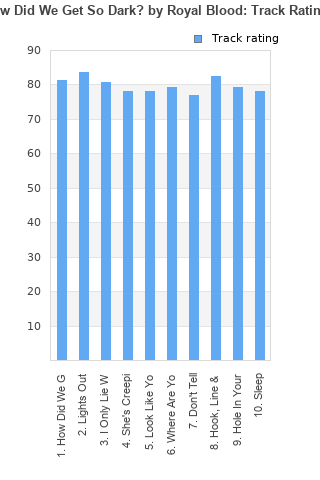 How Did We Get So Dark? rankings

How Did We Get So Dark? collection

How Did We Get So Dark? ratings

Rating metrics: Outliers can be removed when calculating a mean average to dampen the effects of ratings outside the normal distribution. This figure is provided as the trimmed mean. A high standard deviation can be legitimate, but can sometimes indicate 'gaming' is occurring. Consider a simplified example* of an item receiving ratings of 100, 50, & 0. The mean average rating would be 50. However, ratings of 55, 50 & 45 could also result in the same average. The second average might be more trusted because there is more consensus around a particular rating (a lower deviation).
(*In practice, some albums can have several thousand ratings)
This album has a Bayesian average rating of 72.2/100, a mean average of 71.7/100, and a trimmed mean (excluding outliers) of 72.2/100. The standard deviation for this album is 14.3.

How Did We Get So Dark? favourites

How Did We Get So Dark? comments

A bit less valuable with respect to the previous work, simply because they didn't change practically anything in their proposal. The album is however enjoyable, energic, still fresh, despite of all

I really like this album. On first listen, it was "Oh this is not as good as their first album", but on repeated listens I have really got into this album.

Probably deserves more like a 75 rating, but I'm a sucker for riff rock and the fact it's just a bassist with an octave pedal is pretty damn cool too (as a bassist). Nothing amazing musically, but definitely a fun listen of catchy riffs.

but it is excellent, consistant and addictive

I actually really like this new album just as much as I like the first one, but I think you have to keep listening to it over and over to really understand the potential of the record. This is definitely a new direction for the duo because they are introducing a newer, more innovative side to them as they combine both harder and softer songs into the album. It's definitely more poppy than their debut record rather than just kick in the face garage/blues rock. They really expand their sound with this one and I think if you keep listening to it every now and then, you will start to enjoy it as much as I do.

Not sure about the radiohead comparison, the obvious one is qotsa. Think I liked it a little bit more than the first. Nice enough pop rock.

The tricky second album for Royal Blood; they get it right a lot of the time here, but there's also plenty of iffy moments. It never quite gets anywhere, and feels more like a collection of material cut from their excellent debut.

There's still promise here though; their sound is more developed and the experimentations of their style are certainly intriguing (with many songs feeling more pop-esque and some apparently taking inspiration from Bends-era Radiohead structurally and vocally).

It just wasn't enough development for my taste, and the result was a record that lost its excitement soon after it began. It's good, but not really good enough to be considered a worthy follow-up.

Your feedback for How Did We Get So Dark?