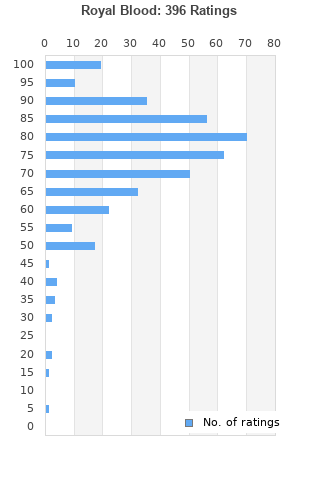 Royal Blood is ranked as the best album by Royal Blood. 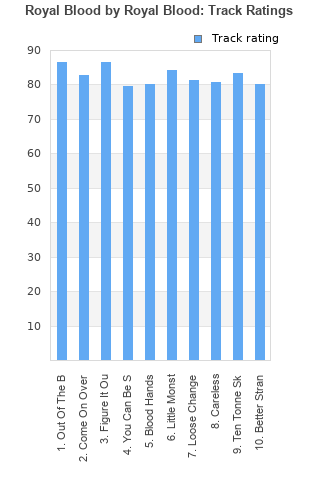 Rating metrics: Outliers can be removed when calculating a mean average to dampen the effects of ratings outside the normal distribution. This figure is provided as the trimmed mean. A high standard deviation can be legitimate, but can sometimes indicate 'gaming' is occurring. Consider a simplified example* of an item receiving ratings of 100, 50, & 0. The mean average rating would be 50. However, ratings of 55, 50 & 45 could also result in the same average. The second average might be more trusted because there is more consensus around a particular rating (a lower deviation).
(*In practice, some albums can have several thousand ratings)
This album is rated in the top 8% of all albums on BestEverAlbums.com. This album has a Bayesian average rating of 75.9/100, a mean average of 75.1/100, and a trimmed mean (excluding outliers) of 76.0/100. The standard deviation for this album is 14.6.

This album is just pure energy right from the start and the duo really blow me away with the quality of performance on this album. The tempo never really slows down and you are treated to this rough and raw sound which is so gritty and easy to fall in love with. The riffs are phenomenal and really make this release work as they get the music stuck in your brain for days to come and they draw me back to this album regularly. I really enjoy the vocal as well and I think the drum work goes under appreciated. It really adds a backbone for the bass and plays a massive role in keeping the energy high so the listener is never bored. However, there are a few issues with this release and that is the lack of diversity in terms of instrument and style. After 32 minutes you do crave something different and you almost want them to show a bit more of an experimental side. It can also be to simple at times and it needs to be a little more complex for me to keep coming back and exploring more. Despite this, the music is so enjoyable that it is very easy to overlook these criticisms and get lost in the music which is why I love this record so much. Overall, a very catchy listen that is so infectious and the duo has really mastered this style of music brilliantly.

Incredible what these two can do. On first hearing this, I never would have believed that it could be played by a two-piece. Sound great live too. A great debut album. I had always been into hard rock/heavy metal/whatever you want to call it, so I might have thought my musical palate had been saturated with amazing guitar tracks on discovering this in 2014, but no - this sounded unlike anything I had ever heard. A must-listen for any rock fan. My highlights are Loose Change, Come On Over and Figure It Out.

A hard rocking record from just a two man band. Not a lot of variety but nearly every song packs an enormous punch.

Key tracks: Out of the Black, Figure it Out, Little Monster, Careless and Ten Tonne Skeleton.

Great debut album with a pretty heavy sound, especially for the number of instruments that are used. Album is not very diverse though.

Although there is great potential here, they definitely haven't fully developed it here. Not yet, at least. Still decent and enjoyable little album.

I'm not even sure that this is a great album, yet all of it feels so.. timeless. Like one reviewer said, it's like we've known these songs all our lives. An interesting & catchy album nonetheless.

Crazy good debut album. I still remember the day I found this album, and still can't believe the sound comes only from a bass and drums.

All the songs sound extremely similar to me, Might need to take a few more listens, but so far solid debut, interesting to see what the sophomore is like

Your feedback for Royal Blood