Paul & Linda McCartney is an Alias of Paul McCartney

The best album credited to Paul & Linda McCartney is Ram which is ranked number 349 in the overall greatest album chart with a total rank score of 5,393.

Paul & Linda McCartney is ranked number 368 in the overall artist rankings with a total rank score of 5,393.

The following albums by Paul & Linda McCartney are ranked highest in the greatest album charts:

This may not be a complete discography for Paul & Linda McCartney.This listing only shows those albums by this artist that appear in at least one chart on this site. If an album is 'missing' that you think deserves to be here, you can include it in your own chart from the My Charts page!

0
(from the album Ram)
N.B. Tracks must have received at least 3 ratings to appear in the above list. 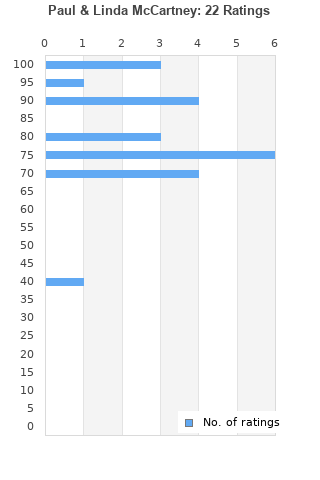 Rating metrics: Outliers can be removed when calculating a mean average to dampen the effects of ratings outside the normal distribution. This figure is provided as the trimmed mean. A high standard deviation can be legitimate, but can sometimes indicate 'gaming' is occurring. Consider a simplified example* of an item receiving ratings of 100, 50, & 0. The mean average rating would be 50. However, ratings of 55, 50 & 45 could also result in the same average. The second average might be more trusted because there is more consensus around a particular rating (a lower deviation).
(*In practice, some artists can have several thousand ratings)
This artist is rated in the top 6% of all artists on BestEverAlbums.com. This artist has a Bayesian average rating of 78.2/100, a mean average of 79.8/100, and a trimmed mean (excluding outliers) of 79.8/100. The standard deviation for this artist is 13.6.

If points for Paul McCartney, P&L McCartney, McCartney & Wings, Wings and the Fireman were totalled together, as they should be, he would be much, much higher in the overall chart. A victim of his own wide-ranging genius?

For a first McCartney solo album its not what you would expect, its quite understated and a little bit middle of the road. Some of the songs don't leave your head, Ram On is excellent and played on the ukelele, Dear Boy is interesting and sounds like a string part to a classical song. Uncle Albert/Admiral Halsey sounds like an irritating kids T.V show theme tune. I like it overall but wheres the edge here?

Your feedback for Paul & Linda McCartney