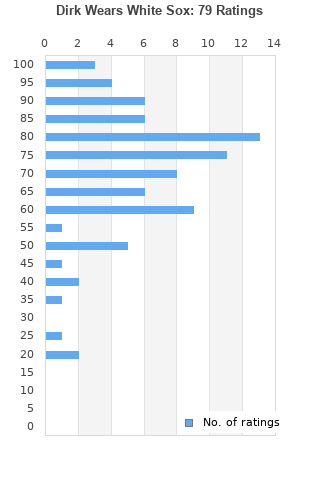 Adam And The Ants bestography

Dirk Wears White Sox is ranked 2nd best out of 7 albums by Adam And The Ants on BestEverAlbums.com.

The best album by Adam And The Ants is Kings Of The Wild Frontier which is ranked number 2191 in the list of all-time albums with a total rank score of 746. 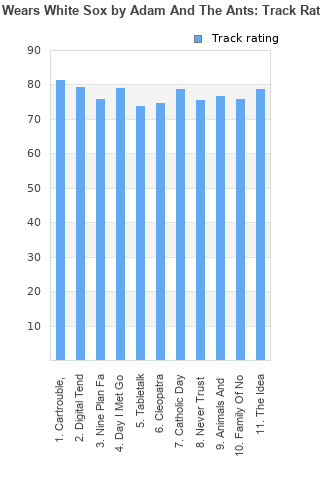 Rating metrics: Outliers can be removed when calculating a mean average to dampen the effects of ratings outside the normal distribution. This figure is provided as the trimmed mean. A high standard deviation can be legitimate, but can sometimes indicate 'gaming' is occurring. Consider a simplified example* of an item receiving ratings of 100, 50, & 0. The mean average rating would be 50. However, ratings of 55, 50 & 45 could also result in the same average. The second average might be more trusted because there is more consensus around a particular rating (a lower deviation).
(*In practice, some albums can have several thousand ratings)
This album has a Bayesian average rating of 71.6/100, a mean average of 71.4/100, and a trimmed mean (excluding outliers) of 71.4/100. The standard deviation for this album is 17.4.

Not my favorite Ants album but Car Trouble, Digital Tenderness, Never Trust a Man and Animals and Men are great tunes that I still enjoy today.

For all the success that Adam Ant eventually had it's sometimes forgotten that before that success, his band and himself, Adam and the antz, released a new wave/punk classic in, Dirk wears white sox. It's a dark and brooding masterpiece. Car trouble, is excellent, one of Ant's greatest songs. Elsewhere there's, digital tenderness, nine plan failed, and, Catholic day, all brilliant. The influence of this album would be felt later on down the line, especially with Blur, who some of the songs here sound uncannily like. Dirk wears white sox, is an underrated record, it needs some rediscovery.

This album is still a fun listen. It sounds bit dated now but I can't help myself.

Of the three Ants albums this is the one I still listen to, Family Of Noise being the best track.